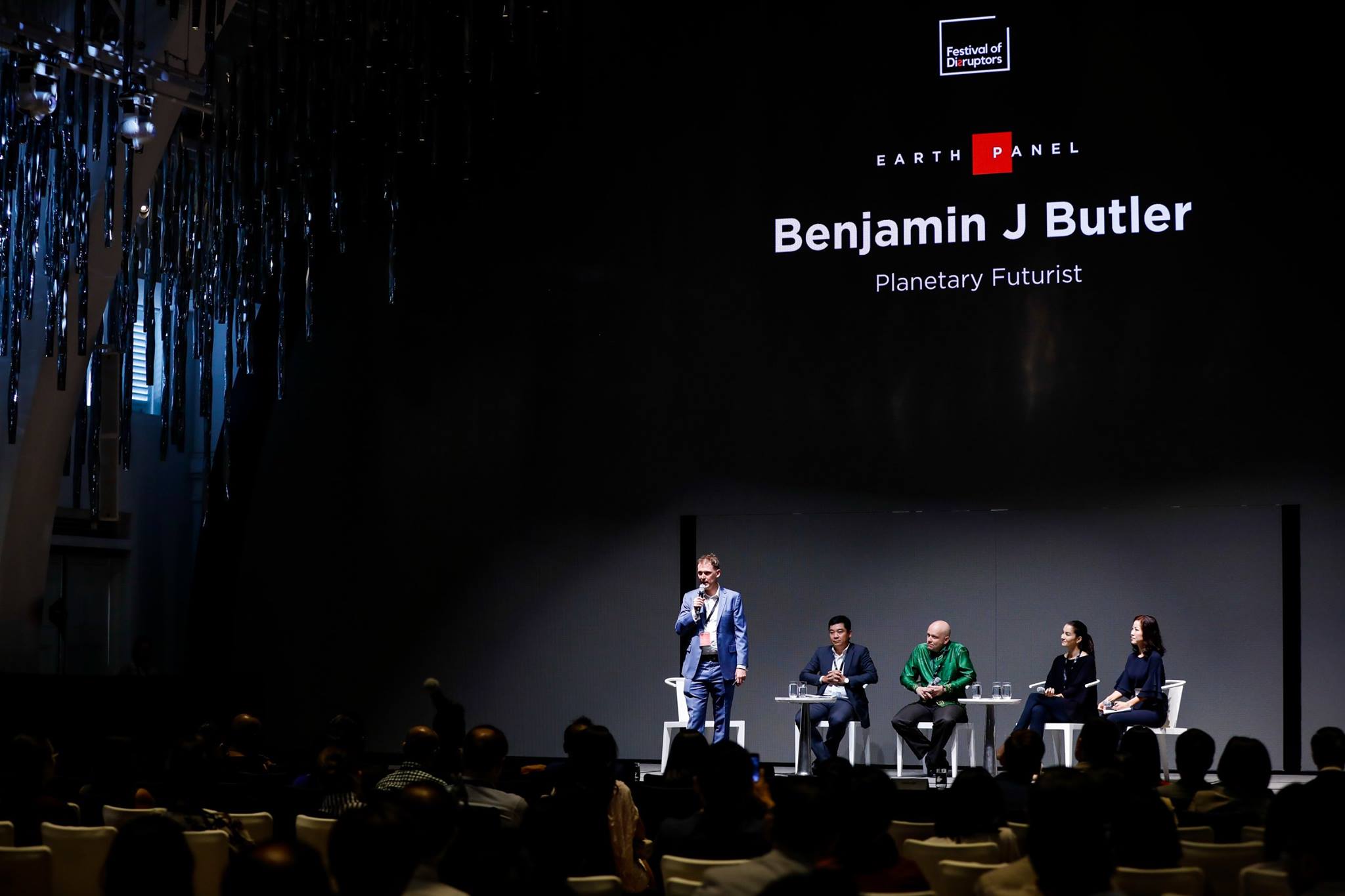 I don’t think we will address the ecological crises we face until there is a fundamental paradigm shift in humanity’s thinking. But as this can happen – potentially – fairly quickly its not all doom and gloom. Other major shifts, once they start, have happened very quickly.

The spread of civilisation may be likened to a fire; first, a feeble spark, next a flickering flame, then a mighty blaze, ever increasing in speed and power.

Facebook kindly reminded me today that I spoke at the Festival of Disruptors in Singapore 2 years ago, so I felt inclined to write a short blog (on a topic which really is at the core of my book). I was on a panel related to the environment, although I was asked to share my more general views about the future as well. In my talk I spoke about a shift to a more ecological way of thinking. Earlier this year as well in front of 100 thought leaders , who make up the Resilience Frontiers initiative of the United Nations, I started to speak about a Gaian way of viewing the world. Indeed I am so convinced that this is the future of our planet, I named my daughter ‘Gaya’.

When you do a public talk you usually get some feedback on how your message is landing. But the truth is, my talk at the UN was done under sweltering conditions and I was kind of just doing my best to just deliver. That said, I don’t feel that it was the most receptive audience I ever had, and that’s been bugging me ever since. At the UN of all places!? [Perhaps I was being paranoid, as I did receive some nice comments, but I felt very perplexed at the time].

Then I realised that I was already speaking to a room full of eco-activists. They had already determined for themselves that the science was settled and we were doomed to destroy the planet and extinct ourselves if we did not act. They were only interested in action. So here we had a smart group of environmentalists, green finance experts and technologists who just wanted to get stuff done. And I was waffling on about various revolutions , paradigm shifts, Gaia and a shift to an Ecological Civilisation in my keynote.

However, its become clearer and clearer to me that such discussion is not a waste of time. This is because the cognitive realm usually precedes the material realm. In fact, I learnt this in my financial career which is very much results-oriented and not at all ‘flaky’! The financier George Soros called this reflexivity: when enough people believe something in financial markets they actually influence the outcome. Also culturally the way we view the world affects our individual behaviours. So the most upstream and powerful intervention we can make is at the cognitive level. We need to create a new story.

And we can get all the world top finance or technology experts together and come up with the best plans, but unless we address how humanity views its relationship to nature and to planet, I assure you NOTHING will change. Because other actors in the system will not budge, and besides we won’t really know where we are going with it either. We need to be speaking the same language. Donella Meadows, who was the visionary activist who influenced the Club of Rome’s well-known report ‘Limits to Growth’ explained in her work that there was a hierarchy of leverage points to intervene in a system:

(in increasing order of effectiveness)

So mindset or paradigm is no 1. I’ve intuitively thought that my entire career.

The paradigm which needs to die (and is dying in my view) is that nature is like a refrigerator, we just dip into it when we need something, and that we are separate from nature. The re-emerging paradigm is that we are fundamentally part of nature and that the Earth is one living entity (or at least one dynamic system), as all the eco-systems within it are fundamentally connected. This what I call the Gaian way of seeing the world.

The newly emerging – and ancient – way of seeing the world might have even more profound ramifications on behaviour than all the science in the world.

What I am suggesting is that our society needs to take an epochal leap to a new type of civilisation, I call it an Ecological Civilisation. In the past it has perhaps done this twice: The Agricultural Revolution of 12,000 years ago and then the Scientific/Industrial Revolution which kicked off in the 17th Century.

To get perhaps a slightly more technical definition of this ecological Civilisation I will borrow the words of Jeremy Lent:

“An ecological civilization would be based on the core principles that sustain living systems coexisting stably in natural ecologies. Insights into how ecologies self-organize offer a model for how we could organize human society in ways that could permit sustainable abundance. Organisms prosper when they develop multiple symbiotic relationships, wherein each party to a relationship both takes and gives reciprocally. In an ecology, energy flows are balanced and one species’ waste matter becomes nourishment for another. Entities within an ecology scale fractally, with microsystems existing as integral parts of larger systems to form a coherent whole. In a well-functioning ecosystem, each organism thrives by optimizing for its own existence within a network of relationships that enhances the common good. The inherent resilience caused by these dynamics means that—without human disruption—ecosystems can maintain their integrity for many thousands, and sometimes millions, of years.”

If this doesn’t take hold then, it’s going to be difficult to enact all the great ideas of academics, technologists and policymakers.