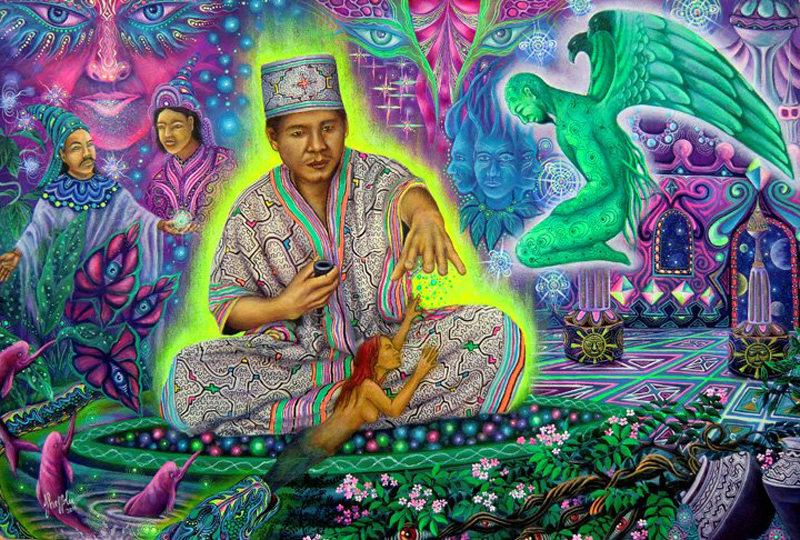 Recently I wrote an article To Live and Die in Tulum about my experiences with plant or power medicines, especially ayahuasca (more to come on bufo), and my views as a Futurist as to how this fits in with what’s happening on the planet today. I believe these medicines are a crucial ingredient to the shift in consciousness that is transpiring in humanity, and think it´s no exaggeration to say that they will support the evolution of the human species.

For the last couple of weeks I have been blessed to stay with one particular ayahuascero – Pashin Nima – at Casa Amazonia in Tulum and he might be one of the greatest healers on the planet today. No wonder so many healers and shaman from around the Tulum area flocked to experience his ceremonies in the last two weekends. These very deep and transformative ceremonies. I have been honoured to chat with him informally and interview him for an upcoming book as well as experience the depth of his ceremonies. And I am so grateful to Renata Sattill for welcoming me in as part of the family at Casa Amazonia which only invites authentic wisdom keepers from the heart of the Amazon.

It is said that Pãshin-Nimá is a spiritual leader of the Shipibo people and the President of the Asociación Onayabo de Medicos Ancestrales Shipibo-Conibo, which acts for the common interests of all the community of Shipibo Master Shamans of Peru. Since the age of 14 he has been hosting ceremonies and is the founder of the Sanken Mai retreat center near Pucallpa, where he has hosted hundreds of visitors from all over the world in the last ten years. Pashin is a very gentle man and the father of 4 daughters – so he is living with 5 woman, and it tells! He brings that gentleness into the ceremony for healing. In fact, he told me that he regards himself as a healer, curandero, ayahuascero or even an ” ET ” and not so much as a shaman. He has experience with hundreds of plant medicines for different uses and knows the ¨souls¨of all these plants.

For those who have never attended an ayahuasca ceremony, please first read my previous article. If you have attended other ceremonies, you will find the Shipibo way a little different. Most of the ceremony is conducted in the dark with only the curandero singing icaros, the healing songs which are channelled. The ceremonies are much quieter than other tribes but one can go incredibly deep.

Towards the beginning Pashin normally clears the space using the strong tobacco, Mapacho. And then begins to sing the icaros. It seems that initially he is creating a safe space in which to do the deep work, and creating protection from interfering energy from outside or between participants.

Then the healing work of the icaros begins. On Pashin´s website he explains the way of the Shibipo curanderos:

¨The lyrics of the songs come improvised as they sing melodies learned from the teachers and pronounce themselves in the secret language of medicine. It is not Shipibo, it is the language of medicine, unlike any other everyday language of any ethnicity. These songs are loaded with the energy of the plants and blessings of the masters with which the curandero has prepared throughout his life, for that reason, the more path the ayahuaskero has traveled, the greater the healing force of his icaros. Hence the importance of the tradition in which the ayahuaskero has been formed … the strength and transcendence of his ability to heal lies in the lineage that has formed him.¨ It is said that the Shipibo people have been around for four thousand years, so its an incredible lineage.

One quite interesting Academic paper explains that the explicit goal of these ceremonies is to unblock dense energies:

¨Although the Shipibo does not necessarily make the same conceptual connections, Western facilitators often understand these dense energetic knots to correlate with psychosomatic and emotional imprints leftover from individual and trans-generational traumas, repressed emotions, or self-sabotaging unconscious views that are rooted in past difficult life episodes, particularly childhood experiences. However, diagnosis is also a continuous process throughout the cleansing and clearing process, reaching into and revealing deeper layers of energetic and spiritual ways of being. When “heavy energies” are uncovered, the onanyabo claim to use icaros to disconnect and dispel them within the individual’s body, sending the “energies” back into the earth. By clearing dense energies from the past, participants become “unstuck” and often significantly transform their relationship with themselves, others, and the world in general.

During the ceremony Pashin circles the room and sings personalised icaros to all the participants, and often hones in on those who need extra help. The space feels full of love and it makes it easy to face difficult memories or aspects of your mind.

The article goes on to say:

¨Once the cleansing and clearing have been done, a culminating last ceremony occurs. The onanyabo focuses on sealing in the “spiritual surgery” and aligning the body, mind, and spirit, together with the perceived energetic structure of each participant, protecting the energetic and physical body while illuminating the pathway forward.¨

This seems to involve the sacred Mapacho.

I have really enjoyed the singing and dancing of other traditions: some of the icaros and songs really lit up my soul, especially with the Huni Kuin. I have had very profound experiences. But the shibipo way is much quieter and it feels like very deep healing and even surgery, and with a little less drama. At certain times I felt that the space was created to enable me to do some self-surgery as well as receiving the energy from the healer. Some people that attend ayahuasca ceremonies get a little fearful in the middle of ceremonies because there is a feeling that you are completely on your own. But this is not the case with Pashin, so it feels very safe. I have completed 4 ceremonies with him and was given the space to have profound insights about my ancestry as well as how to write the book on which I am currently working.

There was an incredibly powerful revelation about my ancestors and family members whereby I saw my whole family tree shimmering with a white aura around it. I realised that whilst most of my family were from humble backgrounds, they had a lot of purity. The image then zoomed in to my mother and she turned in to a wise owl. It made me realise how much I had overlooked her as a teacher. Over the course of my life I often tried to share my new-found wisdom or knowledge and overlooked her gifts. She spent her life as a healer, herbal doctor, and amassed a huge esoteric library over the last 40 years which almost seems designed for me. Even today in her retirement she is still studying. In one evening I realised that my family might not be of aristocracy in the hierarchical British society, but it was of Nobility in the eyes of the Divine. One evening totally shifted my perception of my family. The day after the ceremony I spent the entire day writing a love letter to my mother and basking in this deep peace with my ancestry and family. We also solved a family mystery surrounding my grand father, and how he completely disowned my mother and took her (and all of us) out of his will. This brought my mother and family much peace about a very dark period of our family history.

In other ceremonies I realised why I had such writer´s block regarding my book. I was easily able to write several thousand word articles and even chapters in other peoples´books. But I was getting a little frustrated about my own book. In one journey I saw images about public executions and realised that whilst I am quite a maverick, part of me was still attached to what other people think and the court of public opinion. I was still writing the book feeling to need consult outside authorities, and delving back into research which slowed me down. So my soul was blocking this book as it was it to be 100% from the soul. It was destined to be fearless book about the future of our civilisation and how to approach the future, how to become a visionary artisan of the future. As I was in the middle of writing I kept going back to check things or halted writing in order to read yet another book. Then I got a deeper insight about my gift of expression and had flashbacks of the type writer my parents gave me before the age 10. It turned golden in my visions and then I saw a golden pen and I realised how much love, insights and inspiration I could send into the world if I did indeed write from my soul. The golden pen became a wizards´staff and I could send bolts of light into the world. The next day I called my publisher and told him everything. Not only was he not disappointed by the time its taking me, he seems even more excited. He said that yes we could have already published a pretty good book, but now it would be a ´great´book. Let us see, but the point is that the ceremony completely unblocked me and I have been writing ever since. The power of ayahuasca and other medicines done properly never ceases to amaze me.

It is a rare opportunity to sit with such a Maestro. One shaman , who attended all of his ceremonies so far, described Pashin as a ´Master of Masters´! In Tulum there are many untrained facilitators of medicines. Sometimes one is lucky to have good experiences, but it doesn’t always work out so well. I would seize this opportunity if you are called to do ayahuasca.

If you do decide to join him in Tulum at Casa Amazonia here is some advice in preparing for a Shibipo ceremony from his website:

1) HAVE A CLEAR HEALING INTENTION. What do you intend to recieve from medicine?

2) Three days before and 3 days after the ceremony it is important to abstain from:

3) The day of the ceremony eat light and your last meal must be at 4 pm.

4) You can drink water until the ceremony begins.

5) Rest the day of the ceremony, take a nap so you don’t fall asleep during the treatment.

Comfortable clothes, it is not necessary to come elegant, it is with light off and lying down.

Bring a sleeping bag, pillow, blanket, your teddy bear or your amulets. The main thing is to be comfortable.

Prepare to stay all night, do not make plans the next day that include a lot of exercise or sun or talk too much.