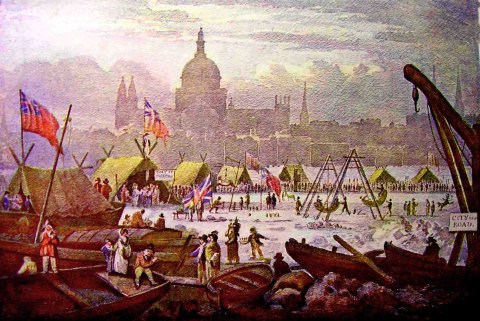 Since the last financial crisis in 2008/9, I’ve been saying that humanity is facing one of its most transformational or revolutionary moments. We face a transitional shift as big as the Agricultural Revolution 12,000 years ago or the Industrial Revolution 300 years ago. Through a holistic analysis I can’t go through here, I always thought that 2020 would be beginning of the severe breakdown phase. The old system was – in a way – a mosquito looking for a windscreen!

In the last week the Bank of England suggested that the upcoming economic data would be the worst in 300 years – specifically since the Great Freeze of 1709. At that time people ice-skated on the canals of Venice and travellers were able to cross the Baltic Sea on horseback . It was the worst winter for 500 years and unfortunately, like many crises, there were second and third order impacts: pandemics, food shortages and it even effected the course of war.

Last week the Bank of England has suggested that future economic data will be the worst in 300 years. According to the Financial Times:

“The Bank of England has forecast that the coronavirus crisis will push the UK economy into its deepest recession in 300 years, with output plunging almost 30 per cent in the first half of the year, but it decided not to launch a new stimulus. In its monetary policy report, the central bank presented rough and ready predictions for the economy, suggesting that output would slip 3 per cent in the first quarter followed by a further 25 per cent fall in the second. This would mean an almost 30 per cent drop overall in the first half of 2020, the fastest and deepest recession since the “great frost” in 1709.

And yesterday we saw the UK announce just the first quarter data, shrinking 2% as a precursor to the second quarter and beyond.

The UK is merely representative of the rest of the world as the forecasts continue to be cut.

“The global economic outlook has darkened further since the IMF forecast last month that it would suffer the worst blow since the 1930s as a result of the coronavirus crisis, according to its managing director Kristalina Georgieva. The fund will next month publish downward revisions to its global economic forecasts, reflecting the fact that the virus had spread further and the economic impact had intensified in recent weeks, Ms Georgieva said on Tuesday. In mid-April the IMF forecast a contraction of 3 per cent in global output, with emerging and developing economies contracting 1 per cent and advanced economies 6.1 per cent over the course of this year. Speaking in an interview during the FT’s Global Boardroom online conference on Tuesday, she said: “With the crisis still spreading, the outlook is worse than our already pessimistic projection. Without medical solutions on a global scale, for many economies a more adverse development is likely.”

CEOs seem to think the economy won’t go back to normal before the first quarter of 2022 at the earliest looking at Fortune’s CEO survey. As I have written before, this might be a little optimistic.

It’s amazing how financial markets seem to be assuming that eventually things will be back to normal. The S&P500 has bounced back 60% of what it lost in the big fall. And some of the tech stocks are barely off their highs.

I believe that over the next few years, the global economy will be faced by a number of headwinds which I listed in a recent blog:

China – which by all accounts – is ahead of the West in terms of the process of reopening, is still seeing quite suppressed consumption data. Using Bank Card Data (from University of Singapore Study) Wuhan is 20% below normalized consumption levels. In Wuhan, recovery started after five weeks, and peaked in week 9 at almost full normalization before retreating back down to -18% in week 11.

Druckenmiller – One of the Sages of Wall St?

When I was working in the investment industry I got to meet and learn from some of the smartest investors on the planet. I remember once spending a day with Stan Druckenmiller, who started out as George Soros’ right hand man and became one of the most astute minds on Wall St. What I appreciated about him was his zen-like ability to simplify things. In every meeting – whether it was the CEO of a real estate company or the Governor of a Central Bank – he would only ask three questions. At the Economic Club of New York this week he didn’t pull his punches, saying that stocks looked really bad.

With markets, “the consensus seems to be don’t worry, the Fed has your back,” Druckenmiller said. “There’s one problem with that, our analysis says it’s not true.” The conversation is going to shift from liquidity to the solvency of companies soon. A ‘biblical wave’ of defaults might be on their way:

He thought that the $2.3 trillion injection of capital into marketing March was “somewhat puzzling and aggressive” saying that the Fed “may not have had to take such extreme measures to shore up the U.S. economy in March had they acted earlier to normalize interest rates”. [The trouble was that given we were in an enormous post financial crisis bubble, every time they tried to normalise interest rates you saw pandemonium in markets like 2018].

Furthermore Druckenmiller said that the $3 trillion in stimulus programs ante likely to spur future growth as: “It was basically a combination of transfer payments to individuals, basically paying them more not to work than to work. And in addition to that, it was a bunch of payments to zombie companies to keep them alive.”

This tweet caught my attention this morning, again what I was saying recently in my writing:

None of my blogs are really meant to be self-contained, bullet-proof and peer-reviewed articles. They merely reflect some thoughts on a given day. Basically I think stock markets and many other risk assets will fall quite dramatically. Some people will legitimately say so what? In fact a significant percentage of Western populations barely have any exposure to stocks, they cant afford them. Many people have been struggling since the last crisis of 08/09.

But in another way, a fall in financial markets is a prerequisite to the unraveling of our old ways of doing things, and our antiquated institutions. Far vaster changes are on the horizon of the 2020s than movements in financial markets. Ultimately I see the potential for another Renaissance and an evolutionary turning point in the history of our species. There is so MUCH good news emerging, but for that you’ll have to read my other blogs!