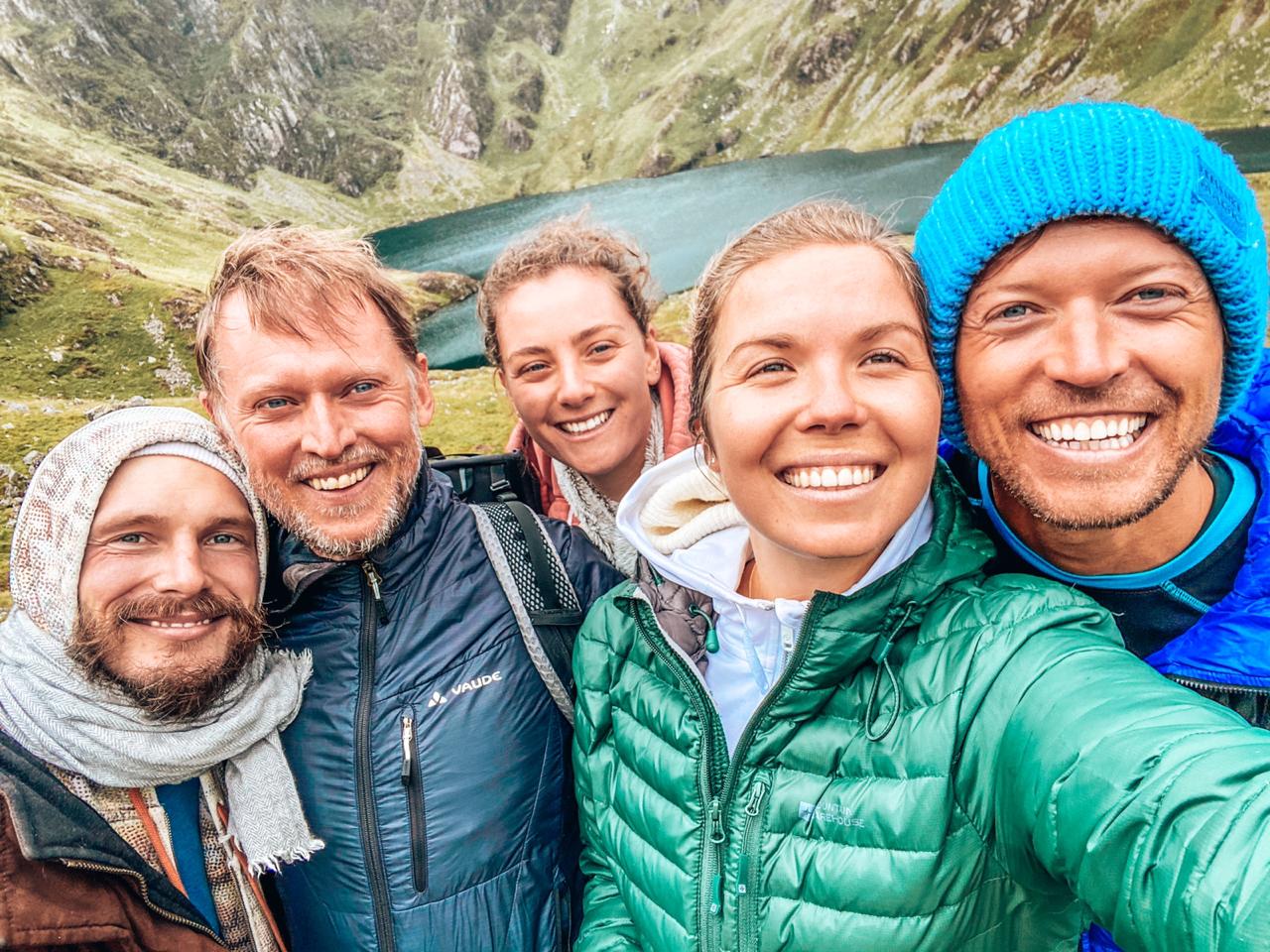 Recently I invited a group of friends to join me in Snowdonia on a vision walk. As always powerful experiences were to transpire. Nature has been huge part of my visioning process and personal transformation from Himalayan pilgrimages to walking around the mythological oasis of South Korea’s Jeju Island. I am also passionate about supporting others on vision quests, initiations and rites of passage and its very encouraging that there is a steady rise in these practices around the world.

I think it’s due to the nature of times in which we live. I wrote in an article earlier this year, with the world in great flux at the moment, many of us currently have a deep ‘call to adventure’, a feeling that we need to step up to our life’s calling. Whether you are a CEO, a fund manager, an entrepreneur, an artist or a poet, vision walks are powerful and useful experiences for our personal and business lives.

For me Snowdonia is a Celtic wonderland, a home of beautiful mountains, glacial lakes, and magical verdure in North Wales. And it’s also an epicentre of Arthurian mythology; a place especially associated with Merlin the druid and wizard.

Merlin, of course, has been somewhat ‘disneyfied’ in recent times. But the archetype of the wizard is a powerful and ancient one. Merlin, of course, was a druid and druidry was the indigenous spiritual path of these British Isles up until the Romans landed on our shores and vanquished them at the Massacre of Menai in approx 60 AD. The druids continued to exist thereafter but not in such large numbers (Merlin was alive in the 6th Century although there is much discussion on this topic). We still see him represented in our literature from Gandalf to Harry Potter.

More importantly than any historical discussion is the archetype: I use the 7 archetypes of the wizard in much of the coaching work I do (poet, wanderer, sage, alchemist, shaman, magician and seer) building on a talk I made at Wonderfruit , regarded as Asia’s version of Burning Man. These represent all the of the skills and capacities of the future including adaptability, creativity and the imagination.

Vision Walks and Rites of Passage

In 2018 I embarked on a solo vision walk for over a month across Snowdonia and Celtic parts of England to further reacquaint myself with my own ancestral land after 20 years overseas. I followed my intuition and inner guidance as to where to go. One of my peak experiences was at the mountain Cadair Idris, which sounds like its from Lord of the Rings. The peaks of the mountain are said to be patrolled by the Lord of the Underworld – Gwyn ap Nudd – and his Cŵn Annwn dogs. The howling of these killer dogs foretold death to anyone who could hear them. And the lake Lynn Cau is where a dragon was once banished by King Arthur. It’s an a very appropriate place to say goodbye to an old phase of your life. Legend has it that if you spend a night on this mountain you will either return a madman or a poet. Given I was already pretty mad, I felt like I only had upside!

Mountains can be powerful places to mark transitions in one’s life (rites of passage), the beginning of a deeper spiritual path (an initiation) or to seek visions for your future (vision quest). Most indigenous cultures had rites of passage and I think its one of the most important things missing from our modern day Western culture as most of us don’t really dedicate much time figuring out what it is we are here to do, even though deep down we kind of know we have a deeper calling – hence why books like the Alchemist become best sellers. Instead we bounce around aimlessly. Or worse still we anaethnetize through addictive behaviours.

In another place or time, you might leave your village to go onto the Mountain for as long as it takes. Animals speak to you, lightning crashes around you, the sun bakes you, and the wind separates the chaff of childhood from the living seed of your new life. Discovering your place in the greater web of things, you offer thanks for your gift and return to share it with your people. Having moved through adolescence, you take up your new place as an adult in your clan. You are worthy of a chance to gain their respect. Your quest has shown you a new purpose and a vision of what your life can be.

The vision quest guide, writer and mentor of mine – Bill Plotkin – has suggested that there are 2 dimensions to the spiritual path. One, that there is the seeking of the unity experience (‘the ascent’) which are emphasised by many of the Eastern traditions such as buddhism. The other is the ‘descent’: the journey into soul:

“There is a great longing within each of us. We long to discover the secrets and mysteries of our individual lives, to find our unique way of belonging to this world, to recover the never-before-seen treasure we were born to bring to our communities. To carry this treasure to others is half of our spiritual longing. The other half is to experience our oneness with the universe, with all of creation. While embracing and integrating both halves of the spiritual, Soulcraft focuses on the first: our yearning for individual personal meaning and a way to contribute to life, a yearning that pulls us toward the heart of the world — down, that is, into wild nature and into the dark earth of our deepest desires. Alongside our greatest longing lives an equally great terror of finding the very thing we seek. Somehow we know that doing so will irreversibly shake up our lives, our sense of security, change our relationship to everything we hold as familiar and dear. But we also suspect that saying no to our deepest desires will mean self-imprisonment in a life too small.”

Although Bill makes this useful delineation, I think like any mental model, it isn’t entirely correct. Zen monks found nature a very important aid to their development and would indeed spent plenty of time wandering in the mountains not just sitting in austere zen meditation. The Zen Master and Poet Basho is a fine example:

“The moon and sun are travelers through eternity. Even the years wander on. Whether drifting through life on a boat or climbing toward old age leading a horse, each day is a journey, and the journey itself is home.”

We had a fantastic time on the land in Snowdonia recently. When I host groups, I normally include solitary time in communion with nature, time for reflection and journaling, rituals, group sharing and often periods of fasting and in ceremony. It isn’t just a case of going for a walk! In fact, they can be very challenging. I did one in the middle of a level 10 typhoon once in the jungles of Hong Kong! [Disclaimer not to be tried at home!]. Here is another short article on the nature of vision quests in the Huffington Post if you have further interest.

My friend Faye wrote this about her experience in Snowdonia where we decided to cross an icy cold wild lake to mark a transition:

I was invited by Benjamin Butler to undertake an initiation as I’d hit a threshold in my life with some ways in which I realised I was holding myself back with thought patterns that really weren’t serving me. In fact my ego was being validated and was keeping me small and in fear.As I swam out across the lake, Leo [Faye’s amazing dog] was crying because he wasn’t able to protect me anymore and it was a symbol showing me how I was leaving my old life behind, my old ways of thinking, and my deep self-sabotage.I heard his cries drift away the further I swam and with each stroke I let go of all ways I was sabotaging myself.I let go of all judgement, lack mentality, scarcity and negativity and as I reached the middle my whole state changed.I felt complete freedom, an abundance of choices and perspectives on my life, and I realised how much self-hatred I was carrying!Benjamin and I ended up swimming across the whole lake and all the way back which was an hour of swimming and I felt a very different person when I reached the shore.Don’t underestimate the power of intentions and initiations, or the way in which we may be holding ourselves back from our fullest potential here in this lifetime!My intention is to love myself unconditionally and remember that I can be and do whatever I dream of! Anything is possible.”

I think everyone should do at least do one vision quest or rites of passage in their lifetime, preferably more. If you have interest in joining me please reach out as I will lead a group in early October. Typically we go for 3, 5 or 7 days.

There are certainly poets who understand the journey of descent. Rilke was one of them:

“You are not surprised at the force of the storm— you have seen it growing. The trees flee. Their flight sets the boulevards streaming. And you know: he whom they flee is the one you move toward. All your senses sing him, as you stand at the window.

The weeks stood still in summer. The trees’ blood rose. Now you feel it wants to sink back into the source of everything. You thought you could trust that power when you plucked the fruit; now it becomes a riddle again, and you again a stranger.

Summer was like your house: you knew where each thing stood. Now you must go out into your heart as onto a vast plain. Now the immense loneliness begins. The days go numb, the wind sucks the world from your senses like withered leaves.

Through the empty branches the sky remains. It is what you have. Be earth now, and evensong. Be the ground lying under that sky. Be modest now, like a thing ripened until it is real, so that he who began it all can feel you when he reaches for you”