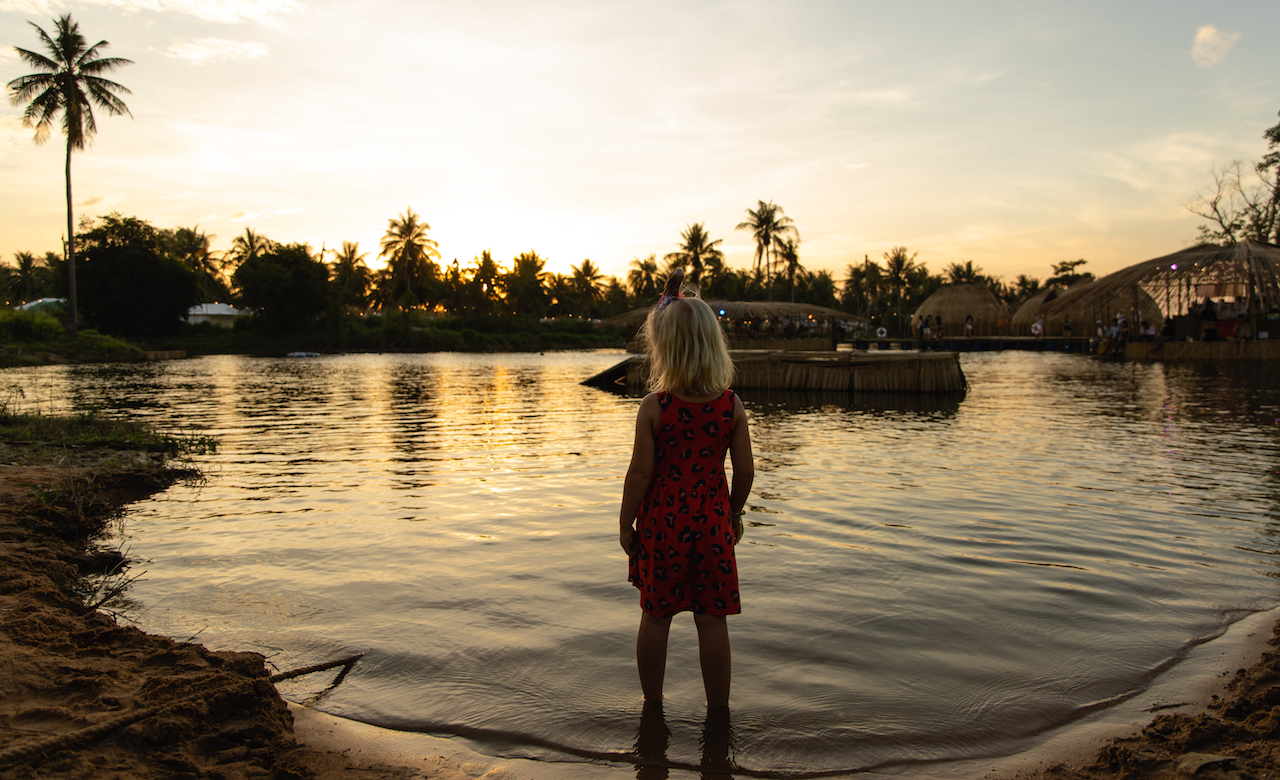 This was first published at Embassy of the Future which is affiliated with the Wonderfruit Festival. Wonderfruit has been compared to Burning Man in the US, as an epicentre of art, music, creativity and even entrepreneurship.

I can’t help but recollect the scene between Frodo and Gandalf in Lord of the Rings by J.R.R. Tolkien, when  Frodo says “I wish it need not have happened in my time.” The great wizard Gandalf replied, “and so do all who live to see such times. But that is not for them to decide. All we have to decide is what to do with the time that is given us.” It’s a stirring moment of the movie and book.

Humanity—all of us—is facing an immense crisis at the moment. You might even think it’s the Battle of Mordor of our times. But it could also be seen as a huge opportunity for transformation; personal transformation and for the transformation of our civilization. We are at an epochal turning point, and it’s a global call to action.

I believe there is a story inside us all. Since I could read, I was fascinated by the stories of warriors and wizards travelling to mystical lands, to see alpine vistas, magical forests and sacred lakes. To walk the road of trials and overcome their fears to fight dragons. My heroes were the wizards, the likes of Merlin or Gandalf, who had to journey into the unknown themselves but also support and guide others on the quest. The idea of an inner and unseen force – magic – also intrigued me throughout my childhood. No wonder I adored Star Wars, Tolkien, and Dungeons & Dragons.

Joseph Campbell, the American mythologist, suggested that many spiritual traditions and mythologies pointed to one story, which he called the Hero’s Journey in his bestselling work “The Hero with a Thousand Faces”. It’s the “story behind the story” as Phil Cousineau called it.

The pattern of the journey is it starts with the budding hero who is tired with the mundane life. There is a calling for something more profound and meaningful. He or she might meet a mentor who inspires or guides him into the next step, the severance from normal life. Many, though, refuse the call until the feeling is sufficiently strong or events force him or her into action.

Finally the hero crosses the threshold into the unknown, and from here embarks on the road of trials. He or she might meet mentors and helpers along the way, but ultimately must face adversity entering dark forests and caves and fighting monsters. The monsters might be societal ideas (conformity), real life obstacles or fears which come from childhood trauma. At some point there might be a death and rebirth as the hero faces the ultimate adversity. And after this transformation, he or she can return to society with the elixir or treasure.

Phil Cousineau described the journey as:

“…about the courage to seek the depths; the image of creative rebirth; the eternal cycle of change within us; the uncanny discovery that the seeker is the mystery which the seeker seeks to know.”

I’ve always found that if I saw my life as an adventure or odyssey, instead of something to control and make stable, it gave me both inspiration and energy. It made me feel alive. And it also made it easier to summon courage in the facing adversity. Along the way, I’ve had to face childhood demons, financial ruin, life-threatening disease and all the ugly faces of the ego. But ultimately it’s the path of self-discovery whatever mountains you climb or trinkets you pick up along the way. This is the very framework I use when I coach leaders.

Within the Hero’s journey, this week I’d like to highlight step one, the call to adventure.

I think humanity is being shocked out of the mundane world. Although it’s tough for many of us, perhaps the crisis is forcing us to change.

Paolo Coehlo once wrote, “if you think that adventure is dangerous, try routine. It is lethal.”

I risked the mundane life when I pursued a law degree at King’s College and nearly ended up a City lawyer. But my heart and soul screamed at me to avert my course, and I departed to the Land of the Rising Sun, Japan, and Wall St for a much more non-conventional life path. I learnt a lot on my initial travels but eventually I started to stagnate in an overly successful career within finance and the excitement of the adventure was dying inside me. In fact, as Paulo Coehlo said ‘routine’ was starting to kill me. If you look around the world today, routine and a lack of deeper meaning is killing a lot of people—whether it’s through drugs or illness. In my case, life looked good on paper but I had a calling for much deeper adventure and transformation.

Joseph Campbell suggests that there are perhaps several experiential qualities to the call. First, you know deep down that if you respond to it you are facing something challenging, unknown and even frightening; you aren’t just evading responsibility. You have a deep sense that you must walk out into the night or tempest. Second, there is something paradoxical about the call: there is something both unfamiliar and familiar, a sense of deja vu. Third, you have a very clear sense that a chapter of your life is ending. What used to be meaningful becomes “strangely emptied of value”. Finally, the call is usually both unexpected and unwanted: it’s as if the future has seized you. Campbell notes that one’s “spiritual centre of gravity” has been shifted “from within the pale of society to a zone unknown”.

A friend and author, Bill Plotkin, describes it:

“The call to adventure is the prologue to the journey of descent. The call comes when it’s time to inherit a greater life, to plunge yourself into the limitless expanse and depth the world affords. This is both a crisis and an unsurpassed opportunity. The old way of life has been outgrown. The familiar goals, attitudes, and patterns of relationships no longer fit your developing sense of who you truly are. The time has arrived to step over a threshold into a whole new way of being.”

The important thing is to start. I love this quote by the Scottish mountaineer W.H. Murray:

“Until one is committed, there is hesitancy, the chance to draw back, always ineffectiveness. Concerning all acts of initiative and creation, there is one elementary truth the ignorance of which kills countless ideas and splendid plans: that the moment one definitely commits oneself, then providence moves too.

All sorts of things occur to help one that would never otherwise have occurred. A whole stream of events issues from the decision, raising in one’s favour all manner of unforeseen incidents, meetings and material assistance which no man could have dreamed would have come his way.

Whatever you can do or dream you can, begin it. Boldness has genius, power and magic in it. Begin it now.”

My experience has always been that once I have the boldness to act, people and resources materialise from nowhere, like magic. And I see this talking to or reading the biographies of great people. This moment of departure, is really an act of faith in the universe or God. You don’t know exactly how it will turn out, but you know you have to depart.

Yearning for the Story

I believe all of us have a story inside us yearning to break out. It’s no wonder to me that many of the best selling books of all time reflect that yearning for the odyssey, to embark on something deeper, to live the biggest story we can. The Alchemist by Paolo Coehlo and Lord of the Rings have both sold over 150 million copies each. Why? Many in the literati hated the Alchemist because the language wasn’t sufficiently ostentatious. But it worked because it spoke to the soul. The shepherd boy, Santiago, left his simple life and risked the adventure in search of his Personal Legend.

If this all sounds too romantic and grandiose for where you are today, think about Steven Pressfield’s experience as he was grappling with his calling as a writer. The hero’s journey shouldn’t be confused with the egoic path, it’s actually one of humility and service:

“I washed up in New York a couple of decades ago, making twenty bucks a night driving a cab and running away fulltime from doing my work. One night, alone in my $110 a-month sublet, I hit bottom in terms of having diverted myself into so many phony channels so many times that I couldn’t rationalize it for one more evening. I dragged out my ancient Smith Corona, dreading the experience as pointless, fruitless, meaningless, not to say the most painful exercise I could think of. For two hours I made myself sit there torturing out some trash that I chucked immediately into the shitcan. That was enough. I put the machine away. I went back to the kitchen. In the sink sat ten days of dishes. For some reason I had enough excess energy to wash them. The warm water felt pretty good. The soap and sponge were doing their thing. A pile of clean plates began rising in the drying rack. To my amazement I realized I was whistling.

It hit me that I had turned a corner.

I would be okay from here on.

Do you understand? I hadn’t written anything good. It might be years before I would, if I ever did at all. That didn’t matter. What counted was that I had, after years of running from it, actually sat down and down my work.”

I’ve procrastinated through my life on so many levels. Sometimes embarking on the journey doesn’t look pretty, but it’s such an amazing feeling once you start. I sense that people all around the world now are re-prioritizing their lives at the moment. If we all act, collectively we could be poised to build a new civilization.

“Once you get into the desert, there’s no going back,” said the camel driver. “and, when you can’t go back, you have to worry only about the best way of moving forward. The rest is up to Allah , including the danger.