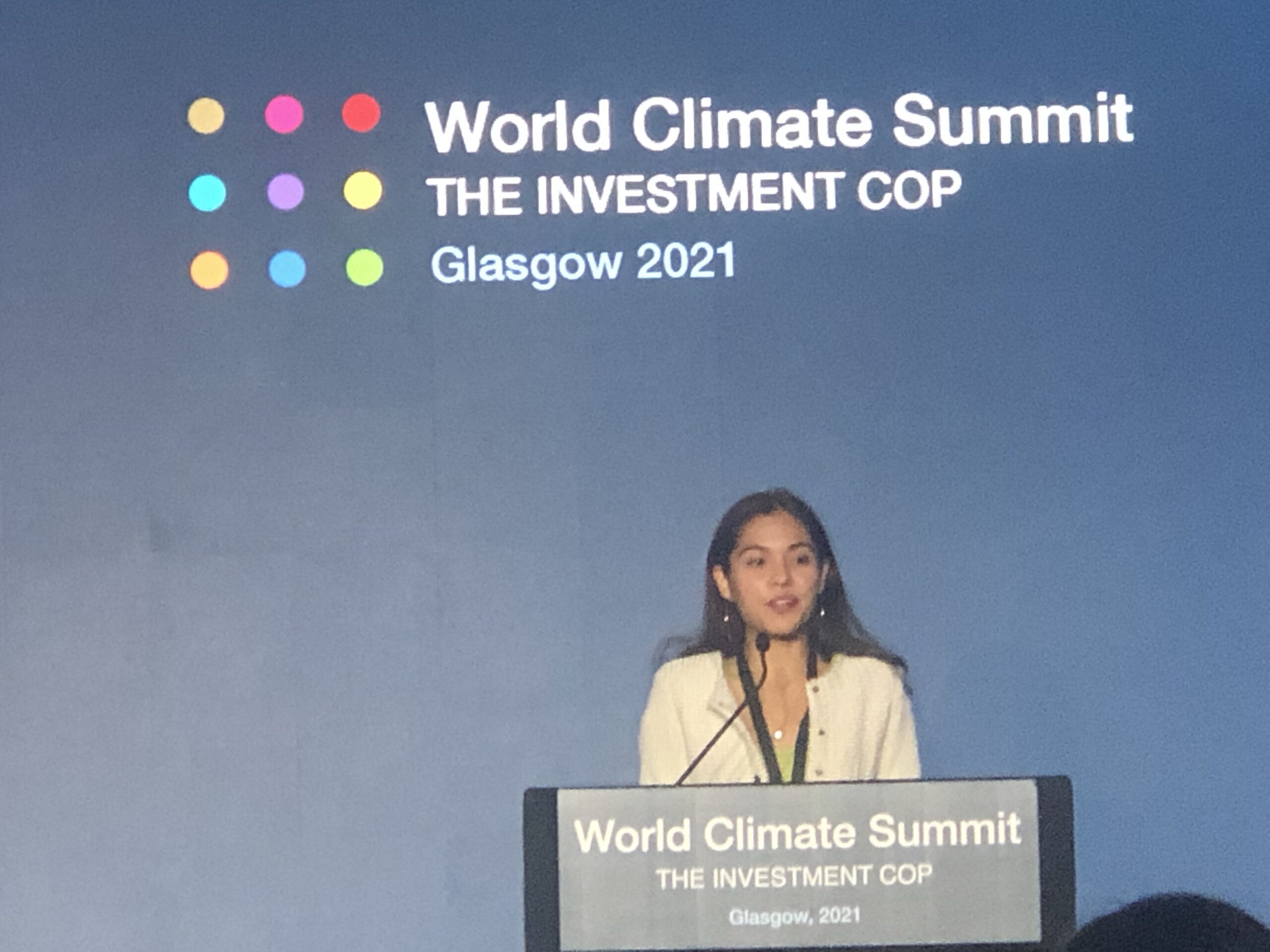 This week I was invited to the World Climate Summit (The Investment COP) in Glasgow on the sidelines of COP26. A lot of influential people were in the room. I sat next to a delegation from Goldman Sachs.

The youth leader Xiye Bastida made an opening address and it was my favourite part as she spoke truth to power and about how she saw the need to go on strike from school to organize Fridays for Future.

My friend Chip Comins – who has been at the heart of COP26 blue zone – kept telling me throughout the conference that Xiye’s voice has been the most authentic.

In the address I was present for, she emphasized inter generational dialogue, quoting an African proverb that the youth can run the fastest but the elders know the road. It’s an inspiring phrase but is it true? Do we have elders who know the way?! Many of the youth don’t believe so.

In the past I have spoken of inter generational theft. We can see this across everything from economics and pensions to the ecology of the planet. My 7 year old daughter Gaya is set to inherit a world diminished in so many ways on our current trajectory. (Thankfully I believe that we will eventually make the changes we need: even though we are not on that trajectory yet on the basis of extrapolation.)

Xiye’s call for Inter generational dialogue is important. Arguably this all started with young activists screaming at the so-called adults in the room to do something. The house is burning down and you are still partying like it’s AD79 : when the citizens of Pompei were about to be killed by the violent eruption of the volcano Vesuvius.

On Earth Day Xiye addressed a conference of leaders which Joe Biden called together and said:

“You will often tell us, again and again, that we are being unrealistic and unreasonable. But who is being unrealistic and unreasonable with unambitious, non-bold, so-called solutions? You are the ones creating and finding loopholes in your own legislation, solutions, policies, and agreements. You are the naive ones, if you think we can survive this crisis in the current way of living. You are the pessimists if you don’t believe we have what it takes to change the world.”

Many of the early youth activists like Greta were just screaming the obvious. Now we need something more elegant: real and more profound.

Unfortunately in the West we don’t really even have the concept of Elders. It doesn’t mean old! In many civilizations since antiquity, elders are those those have accumulated wisdom over the years and are expected to display it in their actions not just through intellectual knowledge. In the West we have prioritized the accumulation of knowledge, especially technical knowledge. We have prioritized cognitive intelligence above emotional, social, intuitive or spiritual intelligence. We have worshipped the head not the heart. True Elders have that balance.

I have spoken to Xiye’s mother Geraldine about the Mayan prophecies and civilization (she is a researcher) and I know that her father Mindahi is a respected Elder of the Toltec tradition in Mexico. Xiye knows what a wisdom keeper is. At COP one of the things I was doing was supporting the Elders of the indigenous territories and nations who have had long term (futurist?) thinking for ever with www.theallianza.org and www.mingaindigena.org. They usually think many generations ahead and draw on the wisdom of the past : just look up 7 generational thinking.

But I think we can also we leverage the growing body of futures research in the West: from Sohail Inayatullah in Australia to Stewart Brand in the USA. It’s a trans disciplinary body of knowledge which is born out of the West but evolved and has been co created around the world.

So the youth are speaking their voice: now the elders need to play their part. And perhaps we should start selecting our political leaders on the basis of wisdom (and common sense) and not on the basis of intellect or politicking.

I truly believe that inter generational conversation is an important element to creating our New Earth. I have written about dialogue in the past but one key part of it is deep listening. There is so much we can learn from each other in terms of knowledge, perspective and wisdom. I wrote:

“Dialogue is a type of social alchemy, a space able to transform a group of separate egos into one collective intelligence. Through this emerges the miracle of insight and creation.”

In my article I went on to describe some of the key conditions:

Listening is one the most critical parts of the container. I love the fact that the Japanese character for listening  (and old chinese script) containers sub characters for attitude, undivided attention, ears, eyes, and heart. We must retrain ourself to listen to understand instead of waiting for your turn to monologue or to do defensive listening, whereby we listen for mistakes.

Respecting means to respect that everyone is in the room for a reason and that they will be a valuable participant in the art of dialogue. It means that we can even completely disagree with them, but still value them. A sign of respecting is a dialogue where there is much inquiry as to other’s perspectives and insights.

Trusting means creating a safe space where we are permitted to be ourselves, to voice tentative ideas and to make mistakes.

Authentic Voicing is the invite to speak from the heart, not just positioning from the mind. There is a collective understanding that human intelligence is vastly wider than the mere intellect. And when one participant brings their deeper self into the collective space, it invites others to do the same.

Suspending is to suspend our thoughts and judgements about others’ perspectives. Instead of resisting other perspectives and waiting to point out flaws in their logic we let go of our certainty. As Bill Isaacs has written:

“Suspension means that we neither suppress what we think nor advocate it with unilateral conviction. Rather, we display our thinking in a way that lets us and others see and understand it.We simply acknowledge and observe our thoughts and feelings as they arise without feeling compelled to act on them.This practice can release a tremendous amount of creative energy.To suspend is to bystand with awareness, which makes it is possible for us to see what is happening more objectively.”

At the end of the conference I was excited to hear the news that the UN was going to create an Envoy for Future Generations inspired by Wales which appointed Sophie Howe as Commissioner for Future Generations. I am so looking forward to meet her (in the next couple of weeks hopefully) and then volunteering any skills or insights I have to my country , the UN and to Mother Earth.

“Action across the world is slow to protect the needs and interests of future generations.

The climate and nature crisis is here, it’s now – that’s why every country in the world needs a future generations act to limit the impact. We all have a duty to protect people not born yet, from the harm they’ll suffer without serious climate action.”

We owe it to our children, grand children and the future generations to think longer term.

This is my daughter Gaya and she totally melts my heart.