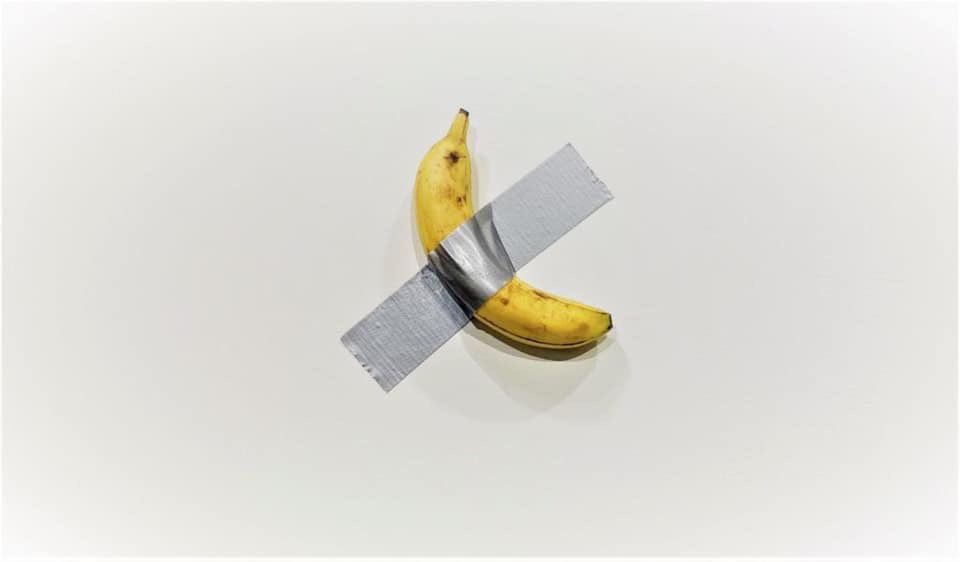 We’ve already had lot of evidence that the global financial system is going bananas in recent years. But the Art Basel in Miami this last week was the latest confirmation, when a top gallery started selling bananas ducktaped to a wall for $120,000. At one point they had sold 2 and were thinking of raising the price.

The artist, Maurizzio Cattelan, apparently thought long and hard about the concept, then “in the end, one day I woke up and I said ‘the banana is supposed to be the banana.” So he went to a supermarket in Miami and just bought a $1 banana and duck-taped it to the wall. Of course the angles were critical.

Oh yes, and then it got more surreal when another artists came along ripped one off the wall and ate it! The write ups about this series of events and the artists’ commentaries are real.

To me, this perfectly encapsulates the state of affairs with global wealth and our current financial system. Clearly, there are significant numbers of people out there who can afford to throw away money at such things: for some people, money is becoming quite worthless especially as they can access almost endless amounts of capital whilst the world is awash with money. Central banks have been printing huge amounts of money and we are living in the largest monetary policy experiment ever. Because of this, there are bubbles everywhere – the biggest I’ve ever witnessed and perhaps the mother of all bubbles. At the same time, if you are on the other side of the financial apartheid – or in the wrong District if I use the analogy of the Hunger Games – so many others in the USA and Western society are struggling to make ends meet and cannot borrow money. And if they do, its at extortionate rates like credit card debt.. I think many of us were shocked when we saw that 6/10 Americans don’t have $500 in savings.

It’s this huge gap in wealth and a feeling of unfairness which is at the root of so many problems in Western civilisation today – from the opioid crisis to the political divide. It might be one of the key reasons why Western Civilisation collapses in the same way as the USSR did in 1991.

The problem with this state of affairs, and the huge distortions in different markets, is that the popping on any number of the bubbles which exist could spark off a global financial crisis. Since September Central banks have been fighting a fire in the repo market, and this might be the one which triggers the wider inferno.

More optimistically it could be a driving force towards a new financial architecture and ways of designing mediums of exchange globally – perhaps cryptocurrencies.

Companies Can Sell Dreams Not Earnings

Crazily enough, despite all the problems we might be aware of in the global economy, the largest stock market in the world is hitting new highs : the US S&P500. Some say that this would suggest health in the US – if not global – economy. But I couldn’t disagree more. I would say its just a reflection of liquidity of capital as alluded to above: lots of money is sloshing around whilst interest rates are the lowest in recorded history!

In fact, in a discussion at the Greenwich Economic Forum in the US recently one of the worlds most famous investors – Paul Tudor Jones – said this is the most conducive environment he has ever seen, especially at the end of an economic cycle! All the worlds central banks have been printing money and of course the US government also introduced tax cuts etc. He called Donald Trump the greatest salesmen ever for selling such a great economic stimulus right at the end of an economic cycle. Of course, its a receipt for disaster.

During the same discussion at the Greenwich Economic Forum, Ray Dalio also agreed that we were witnessing a rather crazy environment. Bearing in mind that interest rates are so low (yield is low) its very difficult for investors to find anything to invest in:

“Because the world is looking for yield, companies can sell dreams rather than earnings. The number of companies that produce earnings is the lowest since the dot-com bubble in terms of their need because you can sell a dream.”

But like me, he thinks we are approaching an end game. And this end game might be the end of the current fiat currency system. This I believe: the next financial crisis will involve a shift in the entire world’s financial architecture. And probably more.

A couple of months ago after speaking at the Bank of America Merrill Lynch investor conference in Tokyo, I commented on the manufacturing recession that was being acknowledged by many of the finance industry’s talking heads. Many suggested that the consumer could still hold up and be unaffected by all of this, but I was wondering whether it was just like the collapse in the housing market in the US in 2005/6, after which we were assured that this would not affect the broader economy. There continues to be a sense of compartmentalised thinking.

In the FT today Gillian Tett contrasts the rather sanguine view that the US consumer will continue to hold things up with the view of corporate leaders:

“……But there is a catch: chief executives appear to have a different view. “Companies are not spending money in America,” Mr Cohn said at the SEC. More specifically, chief executive plans for capital investment dropped 8.9 points in the third quarter to 64.5, well below the historical average of 76.7, according to the Business Roundtable. Meanwhile, industrial production has slid, and the Institute for Supply Management survey of factory activity has been below 50 per cent for four months, a level which normally signals contraction. This is “disappointing”, Mr Cohn added, particularly since he had championed tax cuts in 2017 “to get companies to spend money in the US.” Moreover, Mr Cohn thinks he knows what and who to blame: trade wars, geopolitical uncertainty and 2020 election fears are sapping business confidence, offsetting the benefit of the tax cuts. “If I was a CEO, I wouldn’t be spending either,” he confessed. “Why would you buy steel and aluminium with current prices plus tariffs? Or [with] the geopolitical turmoil and a [possible] change in presidency? A prudent CEO would wait a couple of years — or worse [invest] it in another country.” Ouch.

Recently the ECRI showed us that perhaps the problems in industry could indeed be feeding through to the US consumer, which is still the largest consumer in the world.

I think it’s probably too early to say but this divergence cannot continue much longer.

But one thing is for sure, just because stock markets are buoyant doesn’t necessarily mean that the underlying economy should be fine.

As the ECRI has noted: the S&P closed at a new high two months before the Great Recession began. Also, stocks hit their highs the same month that the 1990-91 recession began. And right after the 2001 recession began, stocks rallied almost 20% in a month and a half, before giving up the ghost.

I believe the end game is fast approaching and have to wonder whether selling bananas for $120,000 will be one of the hallmarks of this mother of all bubbles when we look back in 10 or 20 years. What might catalyse the crisis – the first domino as it were – could be a spark in an important financial market like repos. The death knell for fiat currencies?