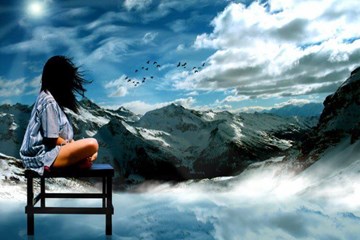 Having been based out of Asia for the last 20 years or so, and practicing Taoism, Zen and Qi Gong, I have a certain take on women leadership. The Tao Te Ching, supposedly written by the Chinese philosopher and mystic Lao Tsu, was written approximately 500 BC. But the universal principles it eloquently introduces – such as yin yang – were also in the I Ching, the Book of Change, which has been around for even longer. These works touch on very profound timeless wisdom that totally changed my own life and influenced much of my thinking as a futurist.

In my keynote addresses, when I forecast headlines for 2030, I have been saying that women might make up over 50% of leaders of organisations of the future. And now I frequently hear that the ‘future is female’. There are so many encouraging signs. However, whilst I welcome many more women in leadership – and actively promote it – I think that an even broader and perhaps more profound statement can and should be made: ‘the future is yin.’ This is the symbol associated with feminine energy in the Tao. If it’s not, I believe our civilisation is doomed. There is a huge deficit of this energy., especially in the corporate world.

““The Pentacle – The ancients envisioned their world in two halves – masculine and feminine. Their gods and goddesses worked to keep a balance of power. Yin and Yang. When male and female were balanced, there was harmony in the world. When they were unbalanced there was chaos.”

Typical surveys, such as the widely-cited World Economic Forum one, forecast that by 2025 creativity, emotional intelligence, and an ability to deal with change etc will all be important. This all makes sense – if the industrial age is ending, which I believe it is, then a more dynamic civilisation will have to emerge. For the last 300 years we’ve thought of people as cogs in the industrial wheel, human ‘resources’. We need to be a lot more creative to make it through this transition.

10 Vital Skills for the future

If I go one step further and think of the mindset needed by those people who’s job it is to peer out in to the future – the futurists – then these might stand out:

Interestingly enough many of these future skills and mindsets are associated with yin energy. And these are important for men and women alike. I’ve been talking about this for years, but we explored them quite somatically at a recent retreat called Vortex . They are strategic partners of my initiative Future Explorers. [Reach out to me for more details or to sign up]. Here are some dimensions traditionally associated with ‘yin’:

Ambiguity: The futurists and military talk about the VUCA world (volatile, uncertain, complex and ambiguous) we face. Yin energy is comfortable with black and white, not always having to make immediate choices. In my case, the more Zen meditation I did, the more I realised that the world is full of paradox and I’m ok with that.

Vulnerability and Expression: Culture change consultants are frequently now saying that organisations must encourage their employees to be more vulnerable and authentic. This creates stronger bonds and more authentic dialogue, which can further lead to insight. I’ve done a fair amount of research on this.

Radiance: This is the ability to attract or magnetise, perhaps people or resources. This is surely important at a time of great change. Entrepreneurs and leaders will certainly need this.

Intuition: For the last several hundred years, hard cold logic has reigned ‘King’. But logic thinks in straight lines and is stuck in the past. I regard intuitive intelligence as the highest form of intelligence; the one able to see around corners. Even as an investor, when I was overwhelmed by facts and figures, my intuition was somehow able to take all of it into account and spit out an answer. In the East, many mediation practices are dedicated to cultivating wisdom and intuition; which is spontaneous and situationally-dependent. Sadly, in the West (and East now), too many people confuse intuition with emotional decision-making, considering it unreliable. It’s not.

Nurturing: Many of our work places sap us of energy, with their cutthroat competition and fear-based approaches. We need to better nurture each other and HR heads know that this is an emerging trend. Perhaps there is a place for ‘love’ in the workplace after all – although many old school managers might cringe at the term! However this article goes through its importance in management: “People who worked in a culture where they felt free to express affection, tenderness, caring and compassion for one another,­ were more satisfied with their jobs, committed to the organization, and accountable for their performance” : love in the workplace article

Sensuality; In society nowadays, many of us are completely disconnected from our bodies. Sir Ken Robinson, in his famous TED talk, refers to professors bodies as merely vehicles to transport their heads from A to B. The same can be true of many of us. We need to be better connected to our bodies, other human beings and our environment. It will not only give us new insights and intelligence, but it will make us happier.

Receptivity: Yang energy can be too focused on pushing something through. Yin energy is very much required when we think about the space needed for more creative dialogue. In my research on dialogue at a design school, we realised the importance of deep listening and space in dialogue and design.

Flexibility: We need to be flexible and spontaneous in the face of rising uncertainty. Powering forward in straight lines don’t work in chaos!

Space: space is so important in life. The most important part of a vase, is in fact the space inside. In modern life we obsess about filling space and doing things. But often space, silence and inaction can be important. As the Tao informs us “Practice not doing, and everything will fall into place.” Of course, this doesn’t mean always doing nothing, but about creating more space in our lives. “Do you have the patience to wait, till your mind settles and the water is clear? Can you remain unmoving till the right action arises by itself?”

“Right now we are globally Yin-deficient.  Global poverty, climate change, privacy, trade and geo-political intractability all point to an over-valuing of the Yang.  Anyone – male, female or gender non-conforming – who is in a position of leadership must anticipate the unintended consequences of our actions.  What we know about the yin is that we have to create opportunities for quiet to listen to that inner voice, our deeper knowing.  We have to have make space so our decision making is more thoughtful and less reflexive.”

I might go as far as saying that for the human species to survive, we absolutely must bring more yin energy into the world again. This means for all genders, so for men as well. But that doesn’t mean a war on yang.

This week I had a delightful conversation with my friend Rupa Dash, the Founder of the World Woman Foundation who is doing amazing work on women’s leadership. In fact, we are hoping to launch an initiative soon. She emphasised some key language in their mission – they seek a ‘harmony’ between men and women. This is the very language of the Tao.

And by chance I also had a conversation with a Tai Chi Master this week. He constantly reminds students that there are 3 aspects to the Tao: the yin, the yang and the whole (which is the circle). I think this is very important to remember as we promote women’s leadership. In this era of constant warlike debate where everything is black or white, I think the Tao has a lot to help us as we endeavour to transition to a fairer and more enlightened society.

If you wish to cultivate more approaches for the future – and explore your yin energy – I do personally coach a small group of people one on one: work with me/. There is also a retreat series (Vortex – a strategic partner of mine) to which I can introduce you for a deep dive in to some of this, it can be very transformational. Please reach out.

I am also working on a a major initiative about bringing more women into the dialogues about the future.

Next time I’ll focus on the importance of healthy yang in all genders.