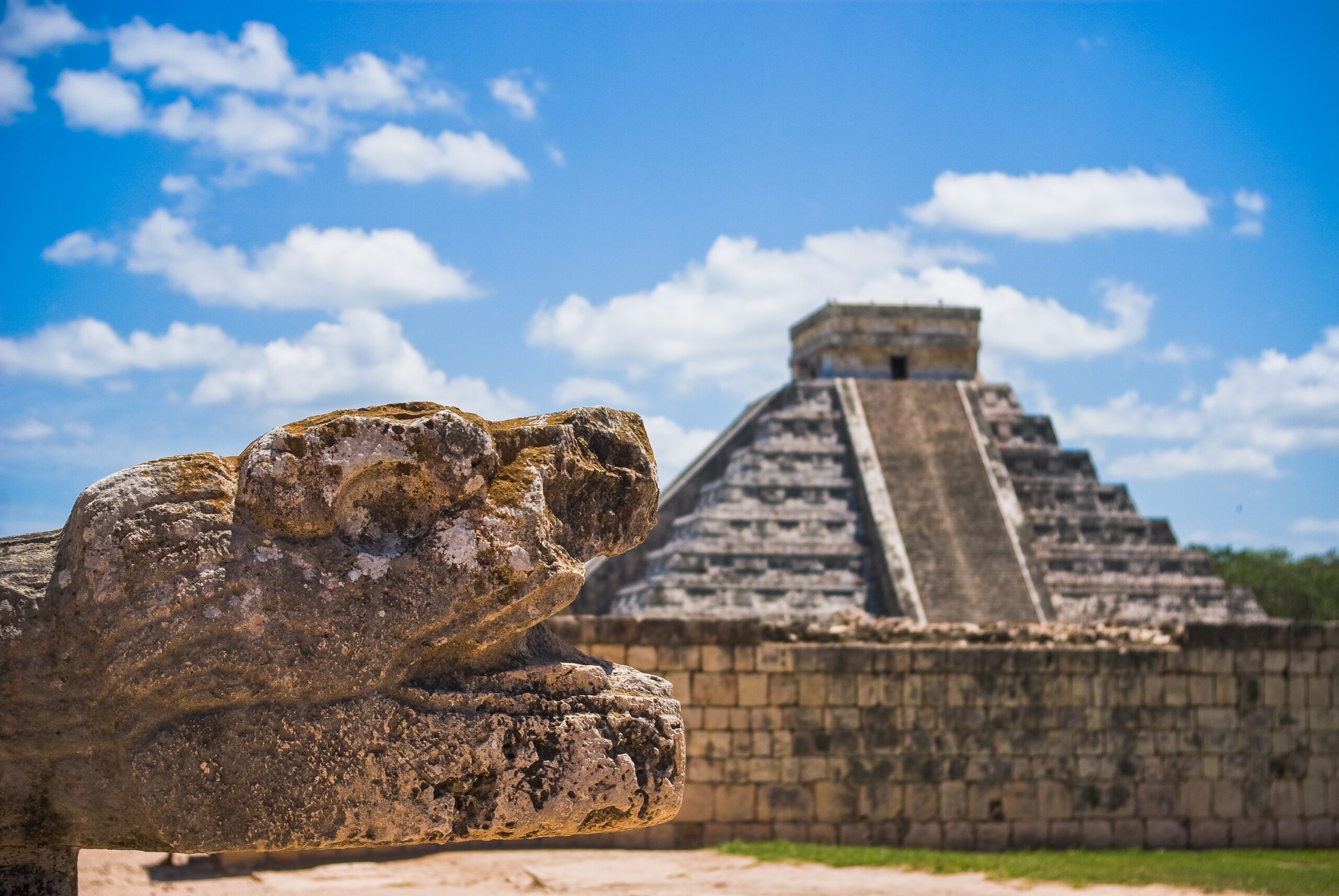 Being on the Yucatan Peninsula I’ve naturally been intrigued by the Maya Civilization and their deep intelligence especially around time. As a futurist this has always fascinated me and I’m so excited to be here at this moment of history.

I’ve been a student of cycles in various forms, for my entire career- from economic and financial cycles to social and cultural cycles to technological cycles and much more. My smartest mentors and friends all take this seriously.

Today one of the most fascinacting places to witness the equinox where day and night are in balance, will be the Pyramid of Kukulcan (The feathered Serpent or Dragon) at Chichen Itza where i was last week! I was accompanied by my friends Yuri Van Geest and Daniel Pinchbeck, who wrote about the Mayan prophecies in his book 2012

It is said that the Pyramid of Kukulcan, at Chichen Itza (above) is a precessional star clock constructed in stone.

On the day of the equinox the staircases are constructed at a intelligently calculated angle so that the image of a serpent or dragon, slithers down the stairs. Graham Hancock in Fingerprints of the Gods wrote:

“Behind me, towering almost 100 feet into the air, was a perfect ziggurat, the Temple of Kukulkan. Its four stairways had 91 steps each. Taken together with the top platform, which counted as a further step, the total was 365. This gave the number of complete days in a solar year. In addition, the geometric design and orientation of the ancient structure had been calibrated with Swiss-watch precision to achieve an objective as dramatic as it was esoteric: on the spring and autumn equinoxes, regular as clockwork, triangular patterns of light and shadow combined to create the illusion of a giant serpent undulating on the northern staircase. On each occasion the illusion lasted for 3 hours and 22 minutes exactly.”

The Mayan civilization had an incredibly sophisticated understanding of time.

I found this simple explanation of the Mayan calendar below on a Blog:

The first of the Mayan calendars is the Tzolk’in, or Sacred Round. This unique calendar used a system based on a 260-day cycle and was believed to represent one of two powerful occurrences in Mayan tradition: human fertility and the pattern of corn cultivation.  The calendar is also based on the numbers 13 and 20, two important figures in Mayan traditions. The 13 numbers, called tones, and the 20 glyphs, or images, worked together like a rotating clock to tell time in terms of days and months. This 260-day cycle, known as the divinatory year, was largely associated with the good or bad luck to be had on various days throughout the Mayan cycle. This spiritual representation for the Mayans did not match up with length of a complete solar year, therefore they implemented the use of another calendar, called the Haab.

The Haab is a calendar that works on a 360-day cycle, quite similar to the Gregorian calendar we use today. Unlike the Tzolk’in, it is calculated in relation to the placement of the sun at various times throughout the year. The use of the Haab was extremely important to civilian life in the Mayan civilization. Its cycle was used to mark important accounting, economic and agricultural events. Although its yearly calculations are a bit different from the 365 day year we are accustomed to, the Mayans made up for the five day difference with a period of nameless days that were believed to be those in which the gods took a rest. These five days, considered to be a dangerous time because the Earth was left unprotected, marked the end of the Mayan calendar and the beginning of a new cycle.

To the Mayans, it was important to be able to keep track of their history, which constituted much longer lengths of time. In order to do so, they created a third calendar, called the Long Count. This calendar represented a cycle of the universe which lasted 2,880,000 days, about 7,885 solar years. Its end marked what the Mayans considered a rebirth of the universe, resulting in great celebrations, much like the New Year’s festivities we participate in today.

The incredible exactitude and complexity of the three Mayan calendars is something to be admired and it is just one of the many reasons the Mayan civilization is considered one of the greatest of all time.”

As the temple of Kukulcan was closed to the public I visited the local pyramids in Tulum and sat in silence at the sacred grounds.

For me as a futurist, I feel that events and time itself appear to be speeding up. Since 2012 something indeed did shift. Some people might consider the notion of long cycles and deep time as a joke but not I. I have had too many experiences. Indigenous peoples also take it quite seriously and perhaps its something we need to learn if we are to survive. The events of 2015-2020 with the breaking down of our old world was entirely predictable, from the division in the West to geopolitical war with China. It wasn’t only the Mayans who suggested this shift. Historians, futurists and even the Dalai Lamas Oracle’s who I met were observing tectonic shifts on the planet. And from 2020 it was not unexpected that things would accelerate further.

But we also see a way out. An old civilization needs to break down in order for the new to emerge. So yes financial crisis, civil discord, perhaps even coup d’etat, climate disasters and other shocks will likely happen. But in parallel new systems will emerge as a new civilization wants to be birthed. So we, the artisans of the Future, cannot afford to let go of our humanity, our inner creativity and light.

Spring now begins. It’s a good time to focus on new beginnings. Even in the middle of this global chaos we shouldn’t be resigned to a negative future, we can all summon the great power of Spring within us. To pursue the guidance of our soul and summon the gifts we all have. In the ancient tradition of Zen, Great Spring can also mean enlightenment.

“The title The Great Spring signifies the great rushing of energy that arrives when you think no life will ever come again. A spray of vitality breaks through: that early yellow-flowering forsythia bush sprouts. Fat robins arrive—you wonder where they’ve been—and the low moan of the pale-gray mourning dove sitting on the telephone wire fills the air. I’ve lived into many beautiful springs, but none ever felt as miraculous as the Minnesota spring. After a northern winter of forty below, you feel certain nature is dead dead—for good. Then the power of life shoots up through elm, birch, and willow, and small crocuses pry open the frozen earth. How can this be? Spring is a force—impersonal, potent, available to all.”

The road ahead might still be long and arduous but walk we must and shall.