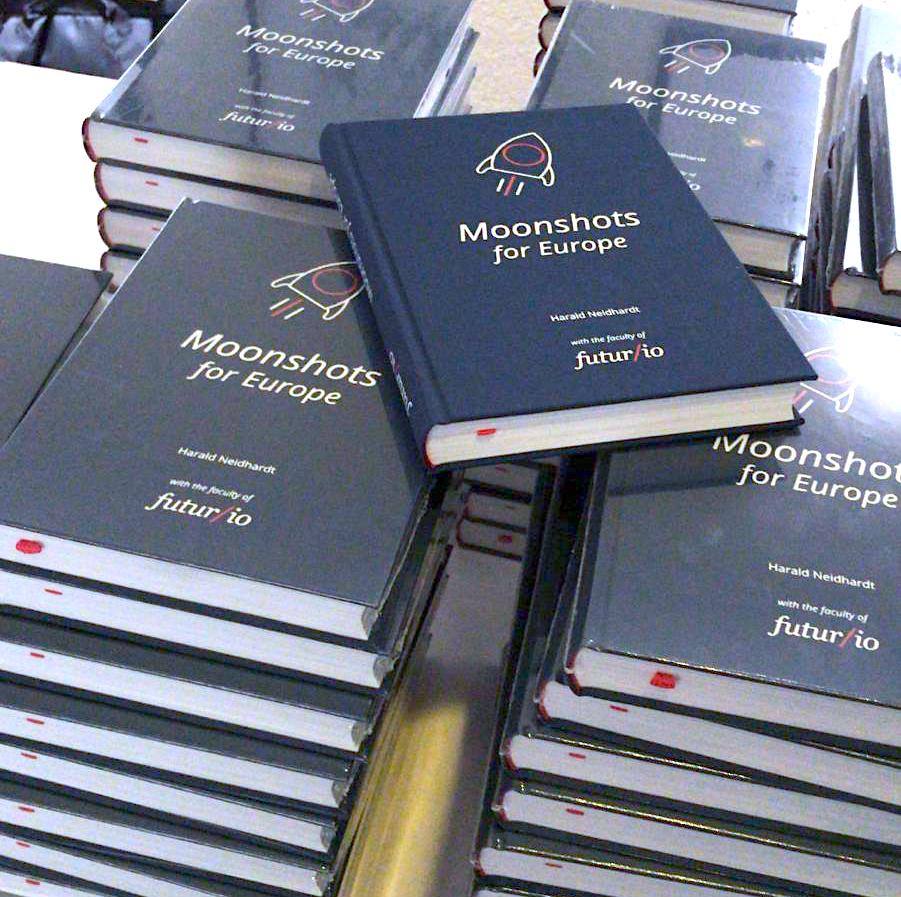 At Davos this year, Futur/io: The European Institute for Exponential Technologies and Desirable Futures launched its first publication called “Moonshots for Europe” in which I wrote a Chapter. I believe it’s a useful book for anyone to pick up regardless of nationality, although much needed in Europe. It’s an incredible assortment of ideas from a whole range of future thinkers including the founder of a new university dedicated to sustainable futures, the Founder of Europe’s first corporate Moonshot Lab, the Chief Futurist of a major European tech company, an influential Venture Capitalist, the Founder of Singularity University in the Netherlands, the Chief Innovation Officer of a top consulting firm, yours truly, as a global but Asia-based Futurist and many others. Here are some thoughts with a quick précis of my own Chapter.

One of my favourite quotes vis-a-vis Moonshots came from Martin Wezowski, Chief Futurist of SAP and a friend

The Founder of Futur/io, Harald Neidhardt starts out the book citing a view I’ve often been known to espouse:

“I strongly believe that Europe is underselling its achievements, deserves more credit for ground-breaking research and must actively create a third way to be an active part of shaping our future society for the generations to come.

Europe is home to invention of the WWW, created at CERN (the largest lab for particle physics in the world); music format MP3 from the Fraunhofer Institute in Erlangen, Germany; Graphene, invented at the University of Manchester, the ground-breaking next material for faster chips and Nano-tech functiona- lity unseen before; CRISPR/ Cas9, the gene editing tool with roots in Spain, The Netherlands and Austria (Lander, 2016); to artificial intelligence break- throughs including the team at DeepMind, London – now owned by Google – that outsmarted the best Go player; to Green-Tech and Fin-Tech pioneers; the highest robot density compared to the USA or Asia (IFR, 2018); to Nobel laureates and ambitious young high potentials like Boyan Slat (see page 256), that start to clean the ocean before they turn 20. We can be indeed proud of our innovative landscape – but we cannot rest on our laurels, as exponential technology acceleration is happening at breakneck speed.”

With the world fragmenting at the moment, and the fear of a new Cold War emerging between the US and China. It really is time for Europe to be a little more vocal on the world stage I believe (along with influential and pacifist nations like Japan). Harald laments that the last time he saw a European political leader have a long term political Moonshot was Helmut Kohl with the merger of East and West Germany. He goes on to discuss a European Dream:

“According to Jeremy Rifkin, “the European Dream“ is one in which individuals find security not through individual accumulation of wealth, but through connectivity and respect for human rights. Rifkin‘s concept of connectivity is displayed in the Dutch people‘s quest for gezelligheid (meaning a cozy, inclu-sive environment), as well as the social market theories that have dominated French and German economic planning since WWII. Rifkin argues that this model is better-suited to 21st-century challenges than the ‘American Dream’ (Rifkin 2004).

Perhaps the European Dream can also be captured by the Copenhagen Letter, the organiser of which (Madsen-Mygdal) contributed a chapter to the book. It reads:

“Tech is not above us. It should be governed by all of us, by our democratic institutions. It should play by the rules of our societies. It should serve our needs, both individual and collective, as much as our wants. Progress is more than innovation. We are builders at heart. Let us create a new Renaissance.”

Voices around the world to bring ethics back into tech are getting louder. Just this last week Elisabeth Warren, a US Presidential candidate, has called for the regulation and break up of big tech. And I have even seen huge numbers of Chinese scientists even write a letter demanding better ethics in CRISPR.

My Own Contribution : Look East! Asia as a Crystal Ball

So I was asked to write a chapter and as my interests are quite wide – to say the least! – it was tricky to decide upon what to focus. I have so many thoughts about Europe from the macroeconomic to the geopolitical. Then it dawned on me that I was in a unique position to comment on one important angle – Asia. It still feels that Europe isn’t sufficiently aware of Asia, and this is a lost opportunity.

“Since I’ve been living and engaging with Asia in the 1990s, it has become a much more significant force on the planet. As Parag Khanna, author of a forthcoming book “The Future is Asian” has pointed out, Asia now accounts for 50% of global  GDP and 2/3 of the growth. One quite startling prediction of his is that of “$30tn in global middle-class consumption growth between 2015 and 2030, only $1tn is expected to come from today’s western economies”. I might not agree with all of Parag Khanna’s conclusions (the West might be undergoing a transformation of its own) but I think few people would disagree that Asia’s position in the global economy has transformed in the last 2 decades. Singapore has emerged as the Switzerland of Asia. South Korea is a technological powerhouse dominating areas of electronics and poised to play a large role in the Fourth Industrial Revolution. The ASEAN area continues to grow quite remarkably with Indonesia likely to join the top ten economies of the world. And in recent years India has become the fastest growing of the major ‘emerging markets.’ Japan , often written off by its two “Lost Decades” is still the 3rd largest economy in the world and has been making a comeback in its soft power.

My prognosis is that successful countries learn from others. It is not a sign of weakness. Perhaps one of the best examples in human history was the Meiji Revolution. Anthropologically, economically and politically, its an incredible period of history to study as in a short space of time the Japanese jettison the Samurai and kimono and start wearing Western suits and adopting Western institutions. The Emperor Meiji dispatched senior statesmen and policymakers on grand tours to the USA and Europe in order to learn from the advanced countries there. In a letter to President Ulysses S Grant before one such mission,  Emperor Meiji in 1871 wrote “The civilisation and institutions of Japan are so different from those of other countries that we cannot expect to reach the declared end at once.It is our purpose to select from the various institutions prevailing among enlightened nations such as are best suited to our present conditions, and adapt them in gradual reforms and improvements of our policy and customs so as to be upon an equality with them.” Japan’s advance was incredible: by 1905 they had defeated a Great Power (Russia) in a war.

Today Europe faces many crises from mass migration and worsening demographics to the uncertain future of the EU. As I write this chapter, Paris is in flames with the yellow shirt riots, the UK faces a constitutional crisis as it moves closer to its planned Brexit and increasingly populations are becoming anti-EU and pro-nationalist from Hungary to Italy.  Then there are the global issues which will hit Europe as well. There is the ecological crisis which humanity faces. And when the next economic down cycle hits, one has to wonder whether the Troika of the IMF, EU and ECB will be able to successfully manage the economies of countries afflicted by economic malaise or financial disruption.  In fact, some might suggest that the very survival of the EU itself seems quite precarious.  Finally, massive change is also guaranteed by tsunamis of technological innovation all apparent on the horizon and yet to land.

What inspirations could Europe potentially draw from to build a better vision for the future? What if we look East instead of only West across the Atlantic. Do we actually have more in common with many Asian nations than we do with a young country like the USA? Like Asia, Europe has suffered from invasion and wars. Like Asia we have also seen civilisations come and go, such as the Greeks and Romans. My friend Hugh Peyman, author of ‘China’s Change’, likes to point out that China has experienced some of the most brutal wars of history. We also both have experience in integrating different peoples and cultures. What could a future partnership look like? Is there something to the concept of Eurasia?”

Then in the chapter I cite some specific areas where we can learn from Asia in terms of experimentation and technology and including philosophic approaches to the future. Furthermore, I believe China is the only country in the world whose most revered book is all about dealing with uncertainty – the ‘I Ching’ or the Book of Change. Its been a huge influence in my life helping others look at the future and navigate uncertainty as a futurist and coach. China is a nation which has undergone extraordinary change over time. I quote the Chinese science fiction writer Stanley Chen:

“The biggest characteristic of China is the drastic transformation, and the fracture between different social forms. In a hundred years China experienced the progress that the West took many centuries to complete. From the late Qing dynasty to the Republic of China, to the founding of the People’s Repu- blic of China, to learning from the Soviet Union, to the reform-and-opening-up of the 1980s; every stage lasted only about a few decades. There is something very science fictional and fantastic about this very drastic social transforma- tion.” (Chan, 2018)

You can find out more about Moonshots for Europe here:

The launch event was hugely oversubscribed and I think that this reflected a strong demand for Europe to find new narratives. These are some of my fellow faculty members – I am lurking at the back.

This is from the link on Amazon about the book: