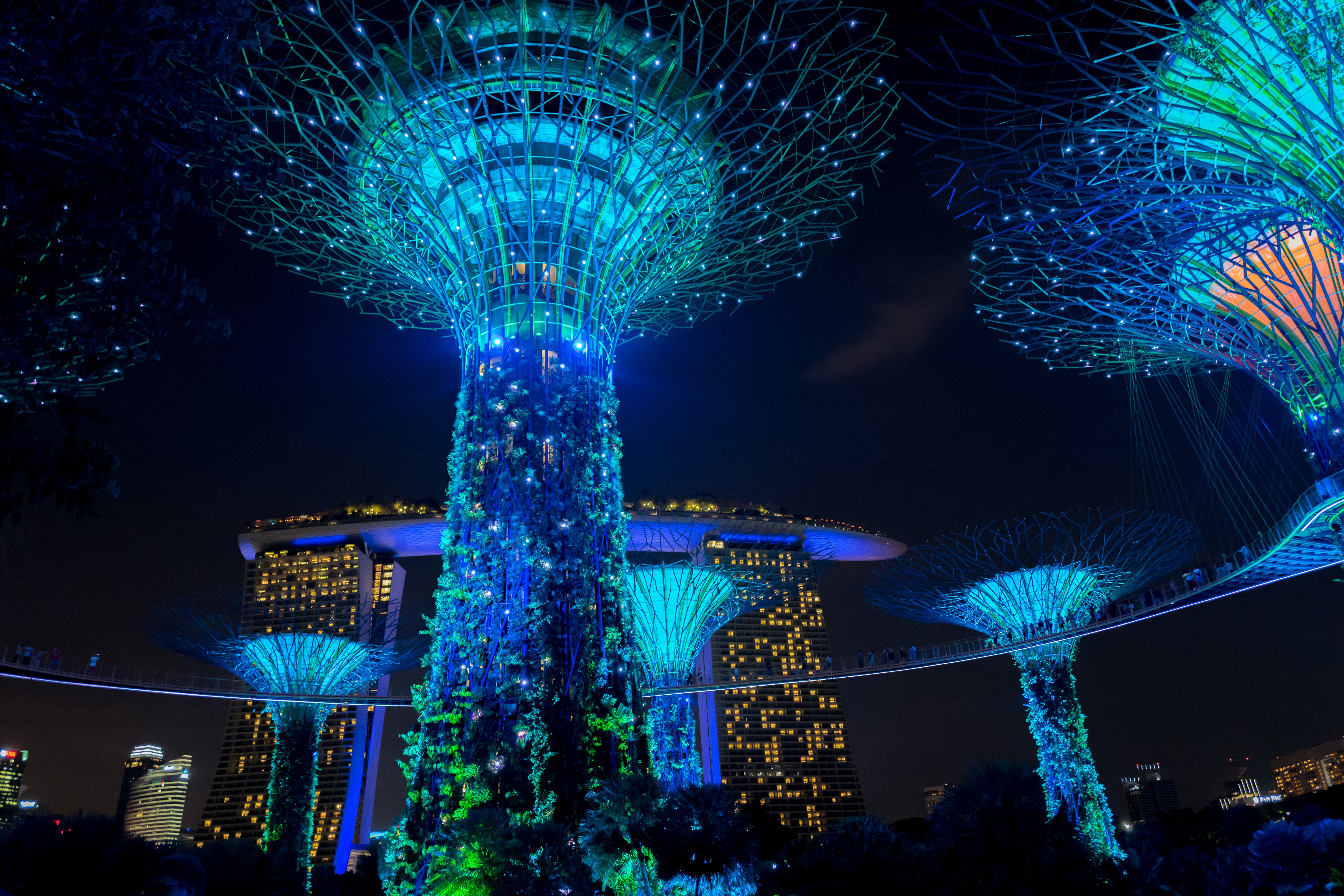 This week I had the privilege to speak at an event in Singapore hosted by Bridge (https://bridge-partnership.com) who are experts in organisational transformation and leadership development called Surving and Thriving in 2030.

Like I often do, I presented an image of the future through reading headlines from 1st January 2030 followed by a fireside conversation about the future and – most importantly – how to approach it.

When I first walked in to the beautiful space at the top of the Prudential Tower in Singapore, I was first struck by the futuristic Singapore vista and the modern but relaxing space inside – the Bridge team did a wonderful job selecting the venue and creating the space and event. Then I noticed on the wall a quote by Alvin Toffler about the skills one needs for the 21st Century:

What a perfect way to begin my talk, and invoke the spirit of a well known predecessor of mine; a futurist who became famous in the 20th Century, someone who my friends knew personally but I never got to meet. And Singapore is a great venue to talk about the future, given how much has changed since I first foresaw a radical trajectory for the city back in 2006. It should continue to be an important hub on the New Silk Road.

I started out the talk emphasising that to see patterns and future trends, one needs to focus on cultivating a clear mind, and a clear way of seeing. Otherwise you will always be hampered by old ways of thinking. This might not be so bad when the world is fairly stable (although it never really is that stable!) But it’s a really problem when the world is changing so quickly. Toffler wrote of a phenomenon he called ‘Future “Shock’ which was akin to ‘culture shock’ but you didn’t need to leave your own country, because trends were accelerating at you. I moved to live in Japan in the 1990s and it was quite a bewildering experience at first. With future shock, people might suddenly feel that they’ve also been supplanted in a new land. Interestingly Toffler passed away about a month before the UK voted to leave the EU and as Trump was gaining momentum in the US Presidential election. Large demographics in the UK and US were soon feeling a form of Future Shock. It might only accelerate as I peer out in to the future. We have multiple tsunamis of change on the horizon: technological, societal, geopolitical, ecological and even civilizational.

I then delved in to the headlines on 1st January 2030.

I often put out some provocative headlines for the future – but I prefer to reserve the details for my speaking audiences. There might be a headline about Boeing and the date for the test running of its first hypersonic commercial jet. Yes we are in the middle of a new Transportation Revolution. The future isn’t just driverless cars – or flying cars – our world will continue to get smaller with the advent of even faster aviation and rail. When I was a at school we could fly London to New York in half the speed it takes today on Concorde, which was disbanded. In the 2020s we will again have Mach 2 Supersonic planes and then move towards hypersonic, as the military is doing now. Even faster trains, like hyperloop, could have a profound affect on the geography of economies like Africa and even the United States.

I wondered about a headline pertaining to a class lawsuit involving AI. Perhaps directly against an AI (robots might have their own crypto accounts by then) or against say a hospital using AI negligently. In 2030 there will be even more widespread use of AI in everything we do as part of the Fourth Industrial Revolution. In the Second Industrial Revolution everything was electrified – this time intelligence will be added to everything around us. The largest fund in the world – Masayoshi Son’s Vision Fund – is solely focused on AI, so we know it’s a major trend. White collar workers might be like the factory workers of a bygone era who were all replaced by machines. But I don’t think that we all have to worry about our jobs. Centaurs – combinations of humans and AI – are normally more accurate in effectiveness. This has been proven to be true in fields from gaming to health care diagnostics. In fact, one headline suggests that the job outlook for 2030 is robust. We are at the onset of a new Renaissance with a wave of creative jobs needed to bring us out of the Industrial Age.

There might be a headline about Vegas going fully driverless in its CBD. This follows Oslo in Europe. The changes that will happen in our cities will have some of the largest effects on our future living as they are redesigned for people not cars! More space will become available for recreation, community, ecological spaces and new forces of commerce. Children might be able to play football on the street again?

There might well be an article about the 5 year anniversary of a new ‘Oceanic Federation’ of the UK, USA, New Zealand, Canada, Australia and perhaps others. The point is to emphasis a shift in boundaries and organisation on the planet.  The centre of gravity might have moved slightly East and South, but the US is still a technology powerhouse and it is re-emerging from the chaotic years of the early 2020s and the American Civil War 2.0. More people are calling this the Eurasian Century now, however, as trading and connections have brought this vast supercontinent together.  The biggest debate now though is about centralisation vs. decentralisation and it appears that the forces of decentralisation are strong. In this sense local regions and cities are becoming increasingly important.

There’s an article about the Greater Bay Area bouncing back from the Hong Kong Monetary Crisis of the early 2020s. It has turned out to be a powerful metropolis, combining hardware , logistics, finance and services.  There is a forecast for the biggest cities of 2050, and many of these might be in India (SE ASia)  and Africa – like Lagos and Kolkata – it is predicted.

The soft power of countries and regions are shifting, perhaps also reflecting the multipolar world. The movie Black Panther marked a shift in interest vis-a-vis Africa, over a decade ago. And now Americans and Europeans are all watching movies from or about Africa and Asia. Hollywood is important but it is ‘Eurasianised’ to a certain extent, and new cultural centres emerge around the world.

There is a story about 5 new central banks adopting asset-backed digital currencies during the course of 2030. After the next epic Great Financial Crisis 2.0, we see an acceleration to new financial architectures. Many countries are using central bank digital currencies, but some innovative central banks are trying to win back trust through gold or commodity backed cryptocurrencies. The dollar is no longer the lynchpin of the global system.

Sales of gesture-based home screens have been good this Christmas. Minority Report was quite prescient with its forecasts back in 2003. I guess they did use a team of pretty well-known futurists. The web is going spatial now. We have entered Web 3.0. Web 1.0 was primarily users accessing information from websites via their home computers or laptops. Web 2.0 was the advent of social media and the sharing economy. As we were able to access the web through smarphone’s they were able to detect our location, which helped many of these services. But having access to our small computers 24/7 meant that the conditions for social media was ripe.

Web 3.0 is where the internet finally goes 3D and can be accessed by many new devices such as VR/AR. The founder of the web said that the web was meant to be a universal space of information.

“The Web was designed to be a universal space of information, so when you make a bookmark or a hypertext link, you should be able to make that link to absolutely any piece of information that can be accessed using networks. The universality is essential to the Web: it loses its power if there are certain types of things to which you can’t link.”

Until now there have been many things which couldn’t be linked. The 3D Web will include the internet of things, blockchain, and be powered by high speed internet like 5D and rising computational power. The World Brain which HG Wells – the grandfather of futurism – dreamed of will truly start to become a reality.  Magic Leap calls this the ‘magic verse.’ [And Verses.io is pioneering its protocol.]

There could be an article about the largest tech company on one America’s new tech exchanges – its a quantum computing company. The largest tech companies rarely stay at the top of the pack. It’s likely that the so-called FANG stocks will give way to new companies with breaking innovation. The First Quantum Revolution was about understanding the nature of reality. It was a bewildering moment for those involved in it , so radical in fact that most people including scientists outside quantum mechanics decided to just ignore the field as much as they could. This cannot happen much longer as we enter the Second Quantum Revolution. Now powerful technologies which employ quantum understanding will shake our world. Throughout the last decade we might have had some ‘sputnik’ moments on this front and the advances are really happening. Quantum computing offers computational power which could accelerate R&D and simulations in almost any field, enabling us to design new drug molecules which aren’t possible using classical computers, revolutionise material science, predict complex systems like weather/ climate and create unbreakable cryptography.

There is a warm New Year’s Message from Governor Xi, from the International Moonbase this year. Its the first time they are doing this. In 2029 there were too many problems the station was facing – at one point they thought that they had might have to evacuate. As humankind continues to explore into space, it adds new dimensions to our terrestrial technologies.

One article on the business pages notes how now women represent 55% of leaders of self-organising (or Teal level) companies. So whilst they have not reached parity in traditional corporations they are one of the driving forces of the organisations of the future, where leadership is not hierarchical and based on power, but requires transcendent leadership and an ability to hold dialogue.

Finally there is an editorial talking about how the World Economic Forum has now dropped Fourth Industrial Revolution and adopted the term Ecological Civilization. The Industrial Age is now over. Ecological doesn’t just point to environmentally-friendly: it reflects the way we organise ourselves. We are increasingly learning from nature and harnessing her 3.5 million years of R&D. And as Fritjof Capra wrote ‘where we look at life, we look at networks’. We are becoming more decentralised and networked, and all the new technologies are pushing this way, including Blockchain.

Immense change is on its way as tsunamis of technology, society, geo-politics and climate are approaching quickly. Civilisation is in between stories or grand narratives: an old world is breaking down and a new one is emerging. What kind of approaches and leadership do we need now to navigate this complexity and uncertainty?

I will try and answer this in part 2 which will be published soon.