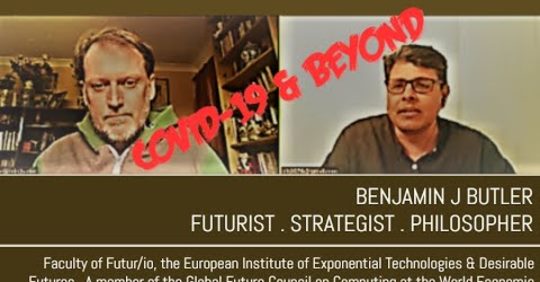 I was just interviewed for an Indian podcast by my friend Hemant Gupta. I think it turned out to be an interesting exploration of where we are and some longer themes. Hemant really felt I could be of service to anxious Indian executives so he worked all day to quickly edit it. Here are the show notes and the video itself.

Covid-19 can hugely affect all asset classes for now, except this one.

Welcome to Optimism as an Asset Class.

Learn How This Is Powering Futurist-Strategist-Philosopher Benjamin J Butler’s advise to his clients and people at large.

In this 55 minute dialogue recorded last evening, we go through some of the nuances of preparing for a crisis like this, viewing the pandemic from medical, economic and financial angles; then connecting it to how this is causing positive precipitation towards third phase transition of humanity.

00:40 How do you think through something like the current crisis?Benjamin cites …and what has holistic thinking got to do with this…blindspots of specialists…

10:05 If questions were like devices or lens to look out to fetch the information…?

…What is the connection between what in Zen is called “Don’t Know” mind and a group of young scientist that Benjamin met at at the World Economic Forum? …group of scientists. . ..who were Goethe-ian *(Johann Wolfgang von Goethe)…engaging from various angles and not jumping to questions and hypothesis. And how is related to what Benjamin was reading at the time? … a science fiction book called “Quick Silver”. In the opening chapter of the book, there is a quote from *Roger Cotes who wrote preface to Newton’s Principia, …”those who assume hypothesis as first principles of speculation, may indeed form an ingenuous romance, but a romance it will still be”.

15:55 People at the helm have to take decisions-on-the-go. And if they are not exposed to these practices, how can they learn this on-the-go…?

Benjamin makes reference to Herman Kahn, originally came to prominence as a military strategist and systems theorist while employed at the RAND Corporation and Pierre Wack, an unconventional French oil executive, and one of the first corporate futurist…and explains further.

39:34 Governments announcing huge packages. USA a trillion plus, Spain 200 bn, Germany saying whatever it takes, Britain echoing that. Are we again looking at socializing losses?

44:26…most conversations that Benjamin is having with other Futurists are extremely positive. What are they? How is what they call “phase transition” in physics have to do with whats positive in the offing? How is this even beyond what is popularly known as the “Fourth Industrial Revolution”?

48:21 from hunter-gatherer to agriculture, and then to industrialization…are we in third phase transition?