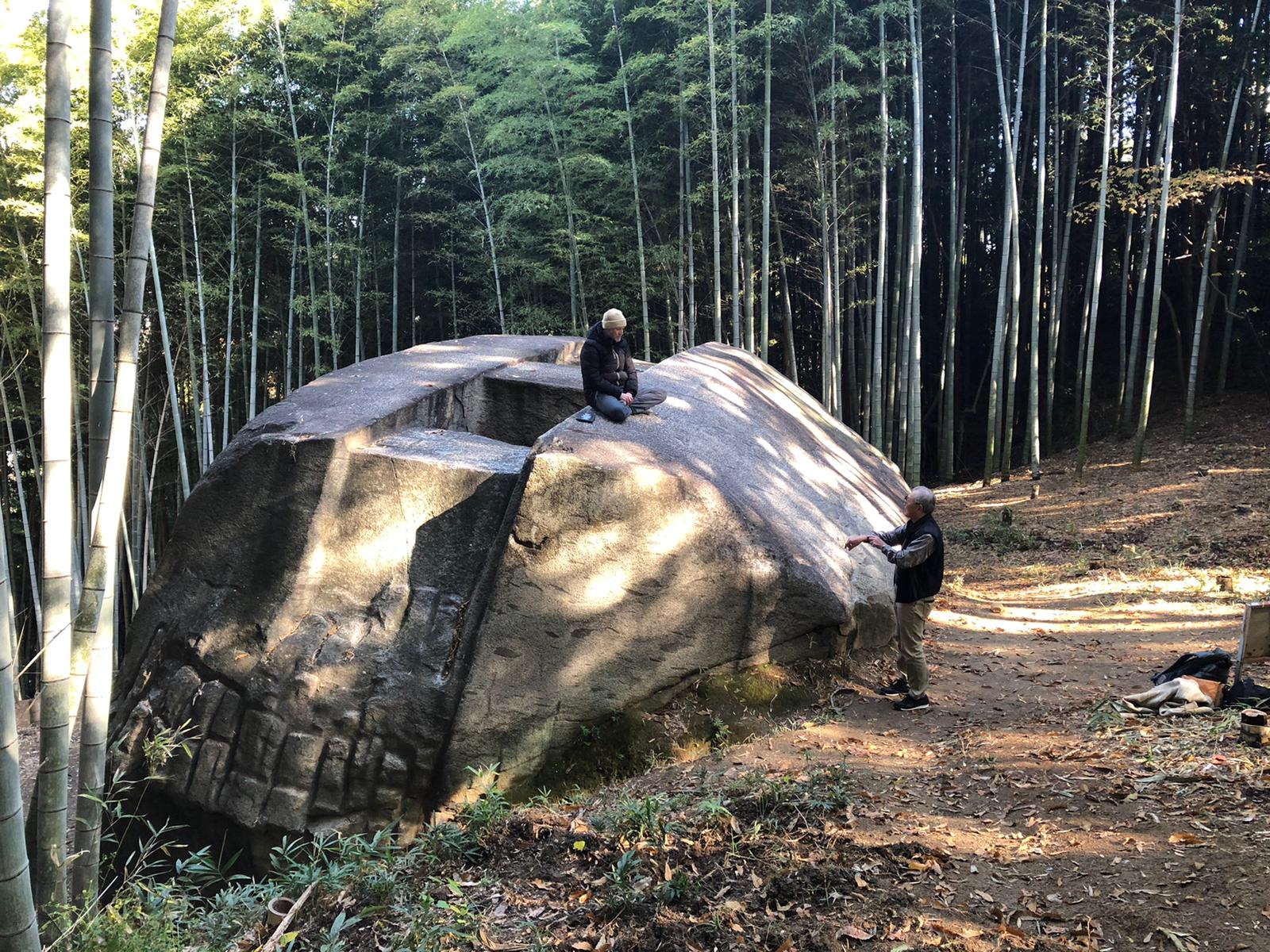 This week I flew to Japan on a secret mission. Amongst various important things that I did, I ended up at the site of a possible ‘alien’ megalith.

For those who do not know I am quite interested in ancient civilisations. And trying to understand the past is essential for a futurist in my opinion. Anything which opens the mind is always a good path. In fact, one of the most interesting science fiction movies of all time must be 2001 Space Odyssey by Stanley Kubrick. In perhaps one of the most important scenes – known as the Dawn of Man – a megalith appears when we were apparently still primates. I’ve been wondering about that scene for a while.

So this week I went to Japan to meet a good friend of mine Echan Deravy (AKA John Craig). He is a real kindred spirit and adventurer. From his base in Japan he has written over 30 books, appeared on TV many times, and has brought to Japan some of the world’s greatest fringe thinkers on subjects ranging from remote viewing, aliens, and megaliths to shaman. This week I was blessed that he brought me to a very memorable place. Somewhere deep in the heart and soul of ancient Japan, somewhere near the ancient capital Nara, we visited something which I’ve never seen in all my years living and visiting Japan. For context, I read Japanese at University and ended up living there for 8 years of my life, so I feel that I have a pretty good grasp of Japanese culture. Furthermore, I am fascinated by Japanese (and Chinese/Korean) philosophy, Buddhism and Zen. This structure we saw this week was NOT Japanese. My first impression was that it was literally dropped by aliens or teleported from ancient Egypt or Peru. Its totally bizarre and I felt like I was in an episode of Lost. In fact, the world-renowned expert on megaliths – Graham Hancock (who is a friend of Echan’s) – has said that this is probably the most remarkable megalith in all of Asia!

99.99% of Japanese are totally unaware of this structure even though it probably predates Stone Henge! I am impressed though that the History Channel’s Ancient Aliens series managed to find out about it. The first part of this clip might be a little too much for you, but the second half has some footage of Matsuda No Iwafune which we visited.

I think because so many people around the world sense we are a crucial turning point in the history of our species, there is a lot of interest in books on big broad historical issues. Just think of Yuval Harari’s book Sapiens and Graham Hancocks work including Fingerprints of the Gods. What is interesting about the history of the human race is that there is so much we still don’t know. We continue to find older and older remains of various humanoids and older and older examples of civilisation. When Plato spoke of an ancient civilisation called Atlantis, perhaps it wasn’t a metaphor after all.

Many technologists today operate from the assumption that we were all savages before the Scientific and Industrial Revolutions. I think that is a huge mistake. First of all, the ancient philosophies have proven themselves to be quite timeless and very useful in today’s hectic world. Just think how Western psychology has borrowed from buddhism and the every growing mindfulness movement. Second, I think we should have a little respect for some of the technologies that various civilisations had. I remember hearing how a Japanese construction company – with the most advanced technology on the planet – was unable to replicate the Egpytian pyramids! I think it would serve us today to have a little more humility and open-mindedness about the past. Yes, our tech and various toys are quite impressive nowadays. But if we are so smart, why is it that we are wrecking the planet and most of the advanced nations are suffering from an epidemic in drug addiction and mental health issues.

Anyway, sometimes its just nice to enjoy the mystery of it all. Our greatest scientists, whilst endeavouring to figure things out, have always relished the mystery of the cosmos. And I encourage you too to keep an open mind.